Microsoft announced a new addition to its lineup of tablets today, the Surface 3. It’s a two-in-one laptop/tablet hybrid running full-fledged Windows. Sound entirely too familiar? That’s because it’s basically the same sales pitch the computing giant made when it unveiled the Surface Pro 3 back in June 2014.

Nearly a full year later, Microsoft unveils… a step down from last year’s release, with a name that no one can get right.

Adding a budget version of an existing product isn’t uncommon, but Microsoft’s naming conventions are throwing everyone for a loop.

DAMNIT @surface web searches for Surface 3 return Pro 3 results b/c of ranking! You guys need to REALLY step up the name game.

Launching the new Surface 3 today with that name is questionable at best.

This Surface 3 business is interesting. However, when the next Pro comes out the name scheme is going to be weird.

This has been an ongoing problem for the brand, which struggled to explain to consumers the difference between the original Surface Pro running full Windows and the lower-end models running Windows RT. (If you don’t remember Windows RT, then Microsoft would like to thank you for your participation in the Microsoft Neuralyzer beta testing.)

It’s not just the potential buyers who are struggling to differentiate between the Surface 3 Pro and the Surface 3. Microsoft’s own search engine is churning out wishy washy results. Type in “Microsoft Surface 3” and the highlighted suggestion from Bing is the Surface Pro 3.

Even the sponsored results can’t decide if they’re supposed to show the Surface 3 or its Pro equivalent, so it just shrugs its shoulders and tosses both at you. 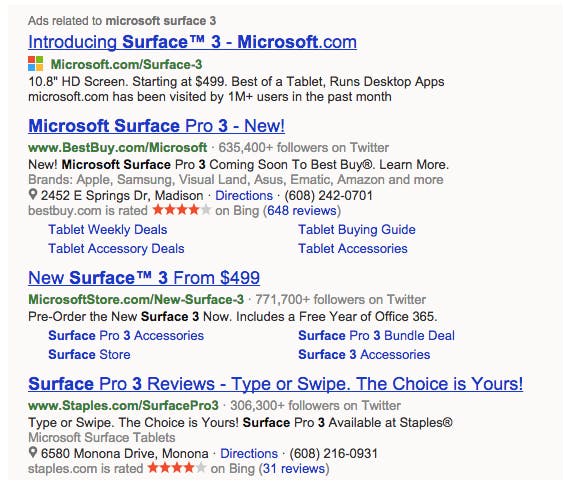 If it’s not bad enough that Bing is serving up ads for both models, the language surrounding those ads is confusing. The Surface Pro 3 and the Surface 3 are both “new” depending on which listing you read. Close your eyes, click one, and hope it’s what you wanted!

There are plenty of enticing features on the Surface 3; it’s thin and light, provides the right amount of portability and function, and it finally provides an affordable route to full-featured Windows without forking out an upwards of $2,000 like the higher end Pro models. Just try to make sure you remember what it’s called. It’s not the Surface Pro 3, it’s the Surface [insert awkward pause to prevent yourself from instinctively saying “Pro”] 3.