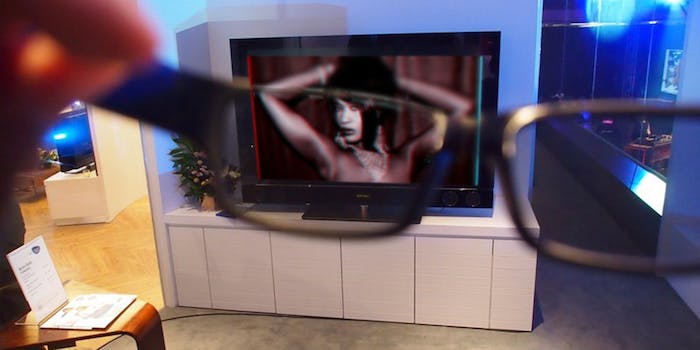 If you were wondering what people were gonna use Microsoft RoomAlive for... well, here's your answer.

Microsoft’s technology, says Jeff Dillon, the vice president of business development for GameLink, will create an all-immersive viewing experience that’s similar to interacting with a partner IRL. “We’re looking at 10 years, 20 years down the road, and we’re wondering, how do we use this technology to create a new, unique experience?” he told the Daily Dot earlier this week. “We’d like to create this whole world that’s all around you, rather than trying to restrict images to this little monitor.”

“I think the trouble with 3D was that when 3D TVs came out, it required people to put on a pair of uncomfortable bulky glasses and just sit there… it wasn’t a compelling experience for users,” says Dillon. “You put the glasses on, you got bodily fluids shooting at you, you’re like, ‘Oh, that’s weird.’”

“These are not your casual fans,” he says. “They like to interact with stars on social media, they develop relationships with them. They have multiple subscriptions to [paid] sites and develop a library of content.” This small percentage of fans will be more than willing to pay top dollar for a heightened, more interactive experience with their favorite performers.

“We have to take risks and develop our own content and these unique experiences you can’t get through piracy,” he says. “You can’t pirate hardware. So we’re trying to be more innovative and create more experiences that can’t be replicated through the tube sites, torrent sites, and file lockers.”