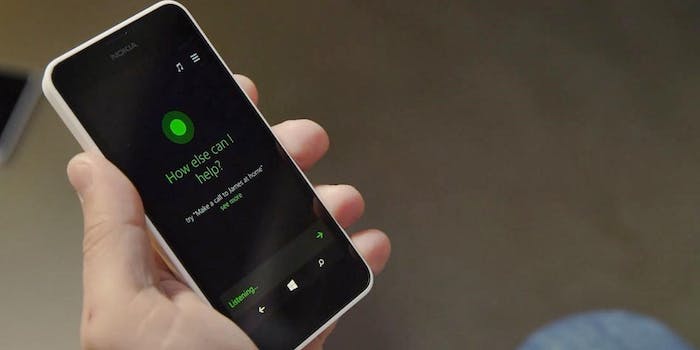 Earlier this year, Microsoft brought its voice-powered assistant Cortana to Android and iOS devices in hopes of stealing some users from Siri and Google Now. But today, if you say “Hey Cortana” to your Android phone, you’ll hear nothing in reply.

The reason for the radio silence stems from a recent update to the Android-ported virtual helper issued by Microsoft. Rolled out on December 20th, the latest version of  the Cortana app removed the “Hey Cortana” feature for users in the United States.

When active, “Hey Cortana” was used as a vocal prompt the app was always listening for to activate the assistant without having to open the app or type anything in. It functioned similar to the “OK Google” feature built into Android devices to make use of Google Now.

It’s the very presence of Google’s own voice-controlled service that seems to be causing conflict for Cortana on its adoptive operating system. The conflicting services appear to cause microphone issues and interfere with typical uses.

“We’ve received user feedback that the ‘Hey Cortana’ feature is conflicting with Android voice search and are temporarily disabling the feature while we evaluate a solution,” a Microsoft spokesperson told the Daily Dot.

The app, which according to the Google Play App Store has amassed between 100,000 and 500,000 download, is now without one of the features that made it most appealing—and there’s no word as to when “Hey Cortana” will be made available again.

Users have already begun expressing their frustration over the change, issuing negative reviews that call for the feature to be reinstated.

“I used to love this app completely useless to me now. I have no use for this without “Hey Cortana” when I can just say ‘Ok Google,'” one user wrote. Another requested, “Please bring back ‘Hey Cortana,'” while stating, “without it kills the usefulness immensely.”

Cortana had established a small but dedicated group of users on Android, in part thanks to the promise that the voice assistant would be integrated prominently into popular open source Android variant Cyanogen OS. Microsoft had announced earlier this month that Cortana would be available for Cyanogen. The CEO of Cyanogen touted the potential for integrating Cortana into the operating system earlier this year.