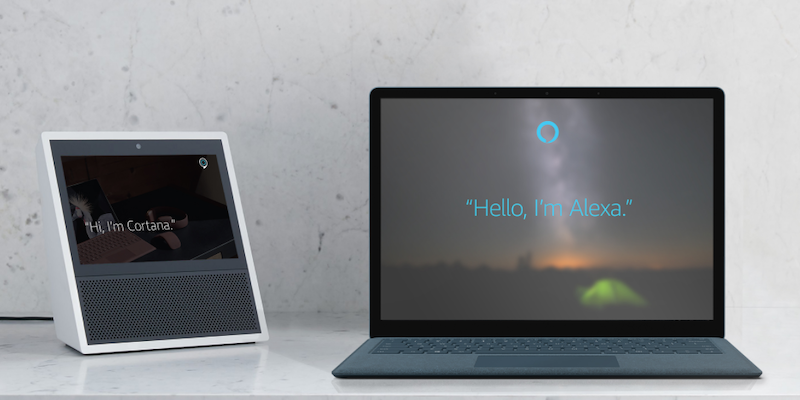 The two digital assistants will be updated later this year.

Amazon and Microsoft have formed an unlikely partnership, striking a friendship between their personal assistants Alexa and Cortana.

Later this year, users will be able to access Microsoft’s Cortana digital assistant from Alexa-enabled devices, and Alexa will be available on Windows-powered machines.

At first, the integration will be clunky. Users will need to ask their Alexa device, “Alexa, open Cortana,” and anyone using Cortana will need to say, “Cortana, open Alexa” to switch from one assistant to the other.

The companies believe consumers will benefit from using both assistants because they each have a unique set of abilities. Alexa devices will now have access to Cortana’s more business-oriented features and integration with Office products, like work calendars and scheduling reminders. Cortana, on the other hand, will be able to access Alexa’s smart home and Amazon shopping features.

“There are going to be multiple successful intelligent agents, each with access to different sets of data and with different specialized skill areas,” Amazon CEO Jeff Bezos said in a press statement. “Together, their strengths will complement each other and provide customers with a richer and even more helpful experience. It’s great for Echo owners to get easy access to Cortana.”

It’s very uncommon to see two giant tech companies form a partnership, especially for an up-and-coming technology. But Microsoft and Amazon will do all it can to fend off competition from the likes of Google and Apple. Interestingly, Bezos told the New York Times he hadn’t reached out to the two rivals but would invite them to join the effort. Microsoft’s CEO Satya Nadella echoed that sentiment: “Hopefully, they’ll be inspired by it. At least that would be my hope.”

Digital assistants are precursors to true artificial intelligence (AI), or machines that can react like humans through learning, reasoning, and self-correction. In an interview with the Times, Bezos said, “I want them to have access to as many of those AIs as possible.”

Microsoft and Amazon said their assistants would be updated “later this year.”