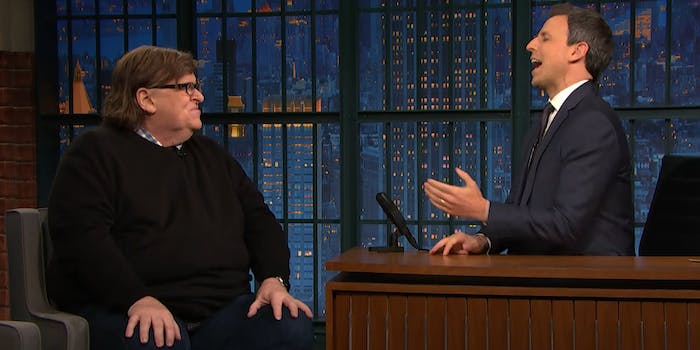 Michael Moore predicts Trump might not become president after all

“He’s not president of the United States yet,”documentary filmmaker Michael Moore said of Donald Trump, appearing on Wednesday’s Late Night with Seth Meyers. And, he says, he may never be.

Noting that Trump’s Jan. 20, 2017, inauguration is “more than six weeks away,” Moore argued that 2016 has been such a wild election year that anything could happen.

“Would you not agree, regardless of which side of the political fence you’re on, this has been the craziest election year? Nothing anyone has predicted has happened. The opposite has happened. So, is it possible that in these next six weeks something else might happen,” Moore teased the audience, “something crazy, something we’re not expecting?”

It’s a bold call, but Moore is on a current winning streak when it comes to outlandish political predictions. In July the filmmaker correctly called that Trump would win the election—even predicting that Democratic majority states like Ohio, Pennsylvania, and Wisconsin would vote Republican.

“It’s like you hit the lotto, but instead of winning $6 million you got kicked in the nuts,” Meyers said as the audience laughed.

“I never wanted to be more wrong,” Moore continued. “I remember when I said this on the show, the audience moaned, like ‘no,’ all because it didn’t seem possible. [Democratic challenger Hillary Clinton] was ahead in the polls, she was winning the debates, it was a great convention. And he’s crazy.”

If a number of Trump’s electors from the Electoral College defect or vote for someone other than Trump, when they meet on December 19th, the result could be thrown. In some states, there are laws against this, but two Texas electors have promised to not vote for Trump—one plans to defect from the Republican nominee while another has straight-up quit to avoid voting. It’s extremely unlikely that the electoral college will turn the tables, but in 2016, it feels like anything is possible.

Watch the full clips below: