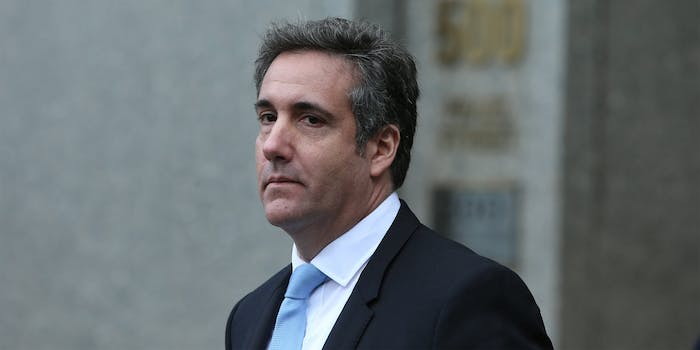 Michael Cohen no longer has a lawyer, may be arrested soon

The lawyer is without a lawyer.

President Donald Trump‘s personal lawyer, Michael Cohen, is no longer being represented by any attorney, a sign that he might be willing to cooperate with prosecutors in the case against him. Cohen is currently under federal investigation for wire and bank fraud, as well as possible campaign finance violations.

According to ABC News, a source said McDermott, Will & Emery LLP was no longer representing Cohen and that replacement counsel had not been announced. Without an attorney, sources told ABC that it’s likely Cohen will begin to cooperate with prosecutors.

Cohen has served as a longtime lawyer and fixer to Trump. He has been intimately involved in the inner workings of the Trump Organization for several decades.

His time in the public eye—as well as the eyes of authorities—began when it was revealed he paid adult film actress Stormy Daniels $130,000 in hush money to keep silent about an affair with President Trump.

Since then, Cohen’s New York office was raided by the FBI, and his personal finances were exposed, revealing he took money from companies hoping to gain influence in the Trump administration.

In recent days, according to the New York Daily News, Cohen has been telling friends he expects to be arrested and charged soon.