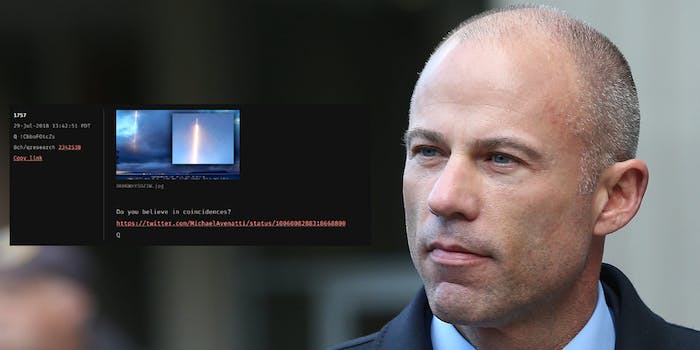 Stormy Daniels’ lawyer is now entangled in the QAnon conspiracy

On June 10, a webcam photo showing what looked like a missile arcing through the air off

Whidbey Island, Washington, was seized upon by conspiracy theory avatar QAnon, who inferred that the missile was part of a deep state plot to shoot down Air Force One as it was on its way to Singapore for President Donald Trump’s meeting with Kim Jong Un.

In reality, the “missile” didn’t exist, and was an image artifact of a medical airlift helicopter’s searchlight caught by a 20-second exposure in low light.

It’s a classic example of conspiracy theorists taking something real (the picture) and using it as the jumping off point for a fantastical plot that has no evidence to support it.

As Daily Dot wrote at the time,

“Conspiracy theories like the “Whidbey Island Missile” work because the human brain is extremely susceptible to both confirmation bias and pareidolia, the phenomenon where we see patterns and shapes where none exist.

But in the real world, missiles aren’t just fired out of nowhere with nobody hearing it, vanishing into thin air. Nor does the U.S. Navy simply launch missiles near populated areas and hope they stay secret.

Q offered no answers to the reasonable questions of who fired it, who knew about it, and what happened to it. So with a plausible explanation for the photo, and no witnesses or evidence to support the missile theory, it quickly faded away.

Or it did, until July 27, when Q returned to the “Whidbey Island Missile,” linked it to the missile strike false alarm in Hawaii in January, and decried the mainstream media for not investigating it.

And at this point, Q actually does try to provide some answers to the reasonable question of “what happened to the missile.”

In the next two posts, he claimed that the missile was “unauthorized” and shot down by F-16 fighters carrying a “CLAS-5” “specialized weapons package.”

What exactly was this “weapons package?” And where did these planes come from?

Q doesn’t get into it. But it’s common for conspiracy theories to depend on secret, classified technology—the existence of which can’t be proven or disproven.

Many of the conspiracy theories about TWA Flight 800 actually being shot down rather than crashing depend on technology that doesn’t exist—in this case, submarine-fired missiles that can hit an airplane miles away.

And in this case, it makes sense—after all, nobody can prove that an F-16 DIDN’T shoot down a missile over Whidbey Island.

Of course, nobody can prove they did, either.

For one thing, such technology is merely theoretical, and Q believers couldn’t quite agree on what the “specialized weapons package” was.

Q is insinuating a classified weapon system was aboard the F16s that took down the missile fired from Whidbey Island, WA that was directed at Air Force One.

But then things somehow got weirder.

A few days later, Q claimed that none other than super-lawyer and Trump nemesis Michael Avenatti was in on the plot—and had secret knowledge that it was taking place.

On June 10, about 16 hours after the “missile launch,” Aventatti tweeted a still from the movie “Top Gun” of a jet fighter in a gun sight, saying that “this week promises to be very interesting.”

Of course, the actual image from the Skunk Bay Weather webcam wasn’t put online until the 11, nearly a day after Avenatti’s “Top Gun” tweet.

It would be reasonable to conclude that the two tweets were coincidental and that Michael Avenatti wasn’t secretly signaling his involvement with a plot to kill the president.

But another hallmark of Q is the idea that there are “no coincidences.”

Hence, the spotlight on the “Top Gun” image of a plane in the crosshairs of another plane.

So why would Avenatti tip his hand to his involvement in a deep state plot to kill the president?

Q has no answer for this, nor does he have an answer to the reasonable questions of why nobody saw or heard the missile launch, where the debris went, or why the deep state would launch a missile to hit an airplane half a world away.

To believers, these questions don’t matter for a simple reason: Q hasn’t addressed them.

It’s easy for Q to toss out absurd claims like the “Whidbey Island missile attack.” And whoever Q is, he/they have conditioned believers to go along with anything the account posts—even if it makes little sense.