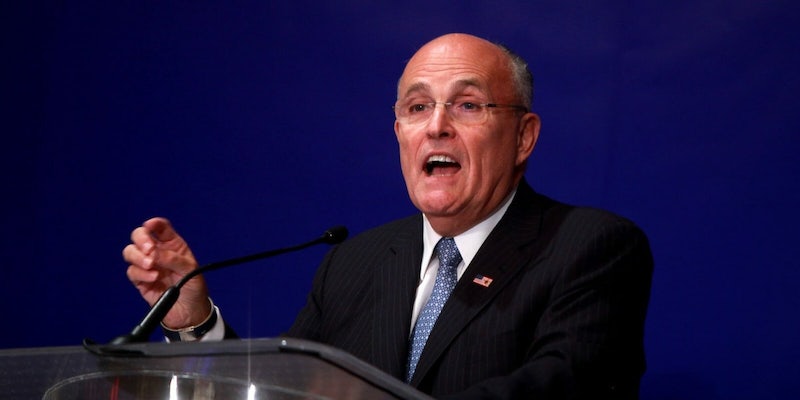 Giuliani implied Daniels lacked credibility because she is an adult film actress.

Michael Avenatti, the lawyer for adult film star Stormy Daniels, called Rudy Giuliani, one of President Donald Trump‘s lawyers, a “pig” for comments he made about the actress where he implied that she lacked “credibility” for working in the adult film industry.

Giuliani made the comments when speaking in Tel Aviv, Israel earlier this week, according to ABC News. The president’s lawyer implied that Daniels did not have a “reputation” because she worked as an adult film actress.

“I don’t believe Stormy Daniels,” he said, adding: “I’m sorry I don’t respect a porn star the way I respect a career woman or a woman of substance or a woman who has great respect for herself as a woman and as a person and isn’t going to sell her body for sexual exploitation. So, Stormy, you want to bring a case? Let me cross-examine you, because the business you are in entitles you to no degree of giving your credibility any weight. Secondly, explain to me how she can be damaged? She has no reputation. If you’re going to sell your body for money, you just don’t have a reputation. I may be old fashioned, I don’t know.”

It was a sentiment Rudy reiterated this morning.

The comments struck a cord with Avenatti, who blasted Giuliani during an appearance on CNN, calling him an “absolute pig.”

“First of all, my client was never a prostitute, which is what Mr. Giuliani is suggesting,” he said. “But even if she was… these comments are pigish and they are disgusting and he should be embarrassed for himself.”

Daniels’ lawyer criticized Giuliani for implying adult film actresses should not be “entitled to respect.”

“Somehow Rudy Giuliani thinks my client isn’t entitled to be believed because she was in the adult industry. It’s disgusting, and this guy is an absolute pig,” he said.

Daniels is suing Trump about a nondisclosure agreement she signed that was meant to keep her from discussing an alleged affair the two of them had in the past. She was also paid $130,000 from the president’s personal lawyer Michael Cohen—which Trump reimbursed him for, according to financial reports.

Daniels also sued the president for calling a forensic sketch she had made of someone she says threatened her for talking about the affair a “con job.”