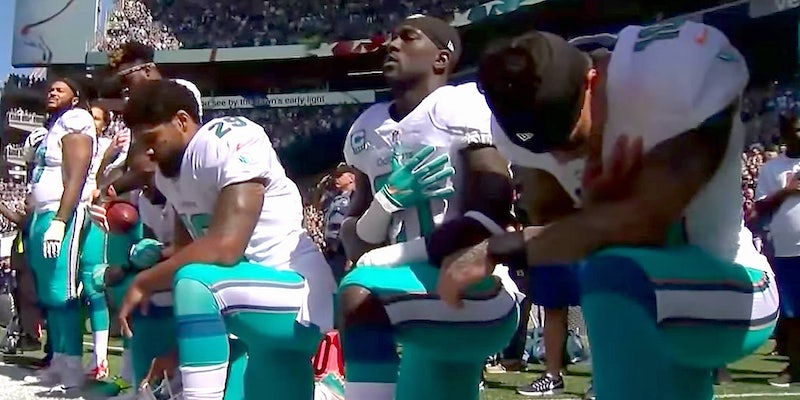 Several Miami Dolphins players took a knee while the national anthem played during the game against New England on Sunday, carrying on a widespread protest sparked by 49ers quarterback Colin Kaepernick earlier this month.

Jelani Jenkins, a linebacker for the Dolphins who knelt last week but stood on Sunday, said in Time his protest was about “racial, social, and economic inequality.” While saying it was not an option for him to “stand idly by and witness men and children who look like me being senselessly shot and killed,” he did not mention law enforcement in the article.

“I am a 24-year-old African-American man who comes from a long legacy of people standing up for what is right,” wrote Jenkins. “I do not have all of the answers and I certainly do not have a simple solution to these issues. By kneeling, I intended to stimulate meaningful dialogue and to raise awareness so that we will be able to find solutions to the problems that exist in this country.”

In response, the president of the International Union of Police Associations, Local 6020, has asked the Broward Sheriff’s Office to withhold police escorts for the players.

Jeffrey Bell, president of Local 6020, told the Miami Herald he respects the players’ right to free speech, but that, “in certain organizations and certain jobs you give up that right of your freedom of speech temporary [sic] while you serve that job or while you play in an NFL game.”

Dolphins players Kenny Stills, Michael Thomas and Arian Foster all knelt for the national anthem on Sunday, despite the police union’s reaction.

The Broward Sheriff’s Office offered no comment on Friday, however, the Miami-Dade police told the Herald it had “contractual obligations” to public safety. “The safety of our residents and visitors is our primary concern.”