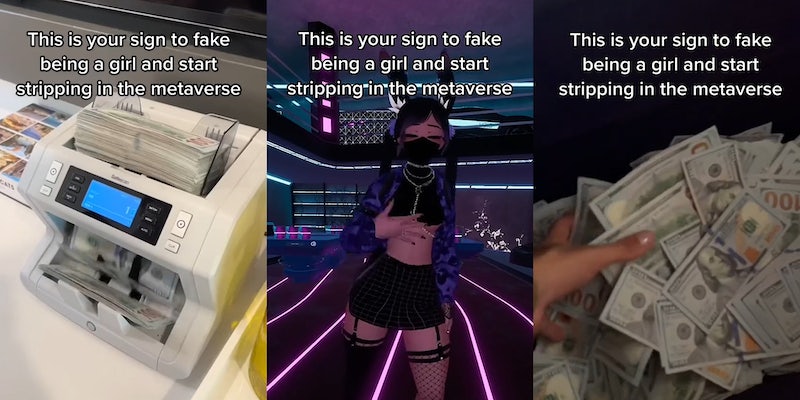 'This is your sign to fake being a girl and start stripping in the metaverse.'

NFT promoters on TikTok are falsely telling young men that they can earn more than $10,000 per week by posing as female strippers in the metaverse.

In numerous videos across the platform, users are shown footage of luxury sports cars and piles of cash supposedly earned through pole dancing in virtual reality.

One such video, posted by the TikTok account @holynft, racked up more than 5.6 million views in less than a week.

“This is your sign to fake being a girl and start stripping in the metaverse,” a caption on the video states.

The video’s comment section has since been bombarded by users eager to learn how to become VR strippers.

“Please i want to join i would deadass do this,” one user wrote.

Even those skeptical of the claim are told by @holynft that the venture is entirely legitimate. The only way to learn, according to @holynft, is to join their Discord server.

Just like on TikTok, the @holynft Discord server is filled with users inquiring about the money-making scheme. One user even claimed to have spent several hundred dollars on a new computer and a virtual reality headset in order to begin his online stripping career.

Yet moderators on the forum once again direct users elsewhere: this time to a Discord channel that provides an introduction to NFTs. After the introduction, users are told about the quality of the Discord server’s own NFT project known as Holy Nephalem.

Realizing they’ve been duped, users have been flooding the Discord server with complaints.

Several moderators eventually admitted in the chat that the TikTok video was nothing more than a publicity stunt but rejected claims that the group was scamming users.

“Making money on the metaverse is real, but the stripping TikTok is satire,” one moderator said.

The Daily Dot reached out to the NFT group to inquire about its promotional material but did not receive a reply.

As it turns out, the footage posted to TikTok is not even from the metaverse but from a video game known as VRChat.

Although virtual strip clubs where dancers can receive tips have been created in virtual reality, one popular VR stripper told Mashable last year that they didn’t even come close to earning a living wage.

Despite the obvious doubts about it, @holynft isn’t the only one out there pushing the fake career path. The tactic of promising TikTok users tens of thousands of dollars through virtual stripping, is being promoted by countless accounts across the site, many centered around entrepreneurship and so-called money-making hacks.