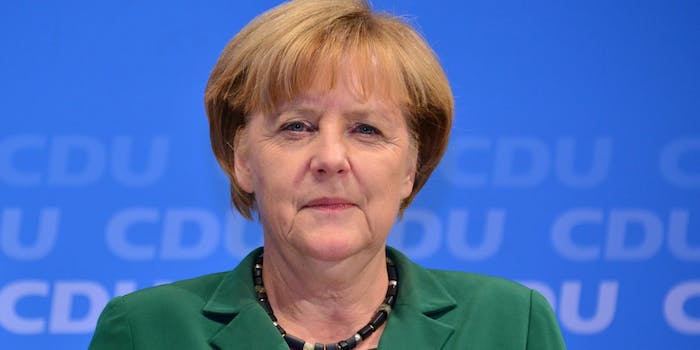 The hills are alive with the sounds of dumb memes.

President Barack Obama is in Germany today at the Group of 7 (G7) summit, where he’s discussing violent conflagrations in Ukraine and the Middle East in front of alpine vistas, as seen in a viral photo featuring German Chancellor Angela Merkel.

The leaders of Germany, the United States, the United Kingdom, Canada, France, Italy, and Japan are discussing sanctions against Russia and the sustained violence of the Islamic State among other topics like climate change and economic turbulence in Greece.

Just about everyone on the Internet made the same Sound of Music joke about the Obama-Merkel picture, recognizing the age-old truism that jokes get funnier the more you repeat them.

This Angela #Merkel in Sound of Music is turning out to be fantastic. #Obama #G7Sum http://t.co/RqYuGKdmi2 pic.twitter.com/C9U7a4uKDd

But there were some original takes (and a lot of chatter about manspreading).

The view Obama and Merkel took in came from Krun, a German town on the Austrian border.

At G7, Merkel focused much of her attention on climate change in an effort to build a crucial consensus ahead of the 2015 United Nations Climate Change Conference in Paris this November. Merkel has been a leader on the issue and is aiming to convince Japan’s government, among others, to take action sooner rather than later.

Merkel said the group has committed to “decarbonize the global economy in the course of this century.”

Merkel’s other two top priorities at the meeting, Ukraine and Greece, have significant consequences. She’s moved, with the rest of the group, to keep sanctions against Russia in place in retaliation for the country’s aggression in Ukraine. Overall, Ukraine proved to be the single biggest issue at the summit.

Finally, Merkel has continued her negotiations with Greece over bailout money as they threaten to leave the Eurozone over defaulted debt repayments.

Obama focused widely as well. Receiving particularly thorough attention, the president said the U.S. will step up training of Iraqi forces to fight the Islamic State. While acknowledging a lack of coherent strategy against the militants, Obama criticized Turkey for not stopping the flow of foreign fighters into the region.