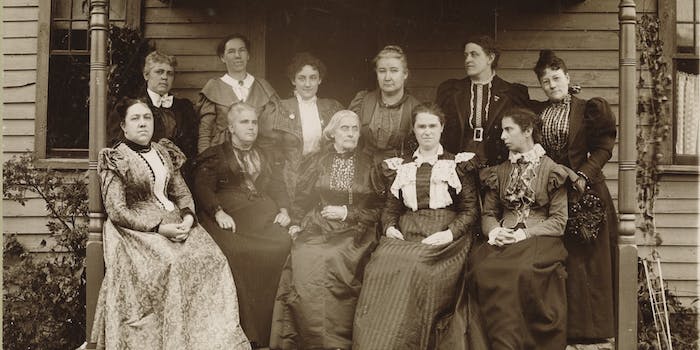 It's been a century since women's suffrage.

One of the biggest surprises of the 2016 presidential election was how many white women voted for President Donald Trump. Many pundits assumed that the release of the infamous Access Hollywood tape in which Trump bragged about grabbing women “by the pussy” would greatly diminish his share of the demographic. Instead, a majority of white women voted for him.

Perhaps now we know why: Their husbands tell them how to vote.

Mona Eltahawy, who writes a feminist newsletter, tweeted, “White American men saying out loud that they force their wives to vote the way they want them to,” and included screenshots in which one man urged others to ensure their wives vote as they do and another said he gets “two votes every election.”

In the former, Jesse Sumpter, whose bio states that he’s the managing editor of a Christian blog, offered a “friendly reminder for elections: make sure your wife votes exactly as you do.”

Sumpter told the Daily Dot via email that people have misinterpreted his words.

“People assume the worst about ‘make sure.’ They ignorantly assume that means beating or coercing the woman,” Sumpter said. “That is not what I said at all. ‘Make sure’ means to check in and make sure you are on the same page. Why get married if you don’t want to be on the same page with your spouse? That is what Jesus said when he talked about marriage: ‘The two shall be one flesh, so they are no longer two, but one flesh (Mark 10:8).’ One flesh means being united in everything in marriage. That is what I am saying.”

In a follow-up blog post, Sumpter elaborated on his views, arguing that while men shouldn’t be abusive or coercive, but at the end of the day, the wife should vote as she’s told, because of the Bible.

Via direct message, Michael Foster, a pastor who has a podcast called “It’s Good to be a Man,” who wrote the tweet about getting “two votes” because his wife votes as he does, denied that he tells her how to vote.

“My wife and I discuss the issues and candidates and make a decision as a couple,” Foster told the Daily Dot. “My position is a household should be united in how it votes and the husband is the head of the household and the wife ought to follow his lead. However, if she doesn’t that shows that their marriage needs to work towards a united view. That isn’t achieved through force or threat but instruction and exhortation.”

Foster added that he and his wife voted differently in the last presidential election.

Numerous men chimed in on each tweet. All appear to be white in their profile pictures, and the vast majority explicitly identify as Christian. All seemed to be voting for Trump.

“My wife has always wanted to vote the way I vote. It’s great to be trusted and respected,” replied one.

“I get two votes as well,” bragged another.

Much of the internet was simply not having it. Some argued scripture, noting the teachings of Jesus, which many theologians hold are to take precedence, do not demand women’s subservience.

“1) Jesus never said *anything* about wives submitting to husbands. 2) But there is something in the Bible about not using the Lord’s name for vain purposes. Check yourself before you wreck yourself,” @ReformedActuary replied.

By far the most common reactions were horror and indignation. Many found it hard to believe that this still occurs a full century after women’s suffrage. A few argued that it’s hypocritical for Christians to grouse that Muslim women are repressed then let men dictate how their wives and daughters vote.

The discourse inspired some women to share tales of the men in their lives attempting to control their vote.

Several commenters, among them many feminists, thought it best for men to ensure their wives vote as they do by asking her who she votes for, then doing the same.

“Men: be sure to make sure your wife votes exactly as you do by asking her who to vote for,” suggested @fit_feminist.