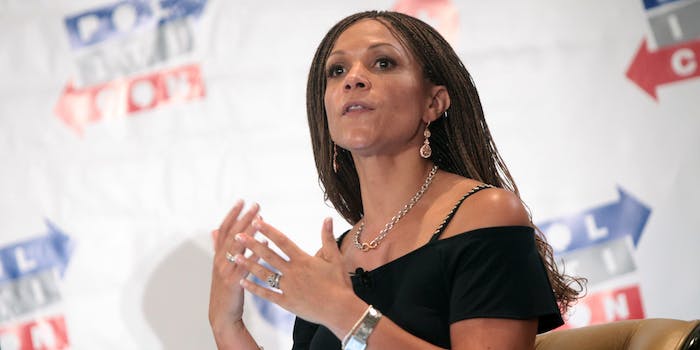 Melissa Harris-Perry: ‘Democracy is for the losers’

'Even when really scary things are happening, we can keep holding on to each other.'

Standing onstage in Cleveland last week, a few blocks from where the Republican Party gathered to formally nominate Donald Trump as its presidential nominee, political science professor and TV host Melissa Harris-Perry had a message for Americans freaking out over the outcome of the November election.

Democracy, she insisted, is all about losing.

That message, at its core, carries important lessons for partisans of all stripes—regardless of whether they support Hillary Clinton, Bernie Sanders, Donald Trump, or someone else entirely.

The former MSNBC host, who has since become a special correspondent for BET after her acrimonious split with the left-leaning cable news network, spoke for about five minutes to close out a stand-up comedy event featuring a trio of Muslim comedians organized by the Arab American Institute.

“I like to say that democracy is for losers. Democracy isn’t really for winners.”

Typically, the Arab American Institute, which was founded in the mid-1980s to encourage civil participation among Arab Americans, hosts policy forums. However, as the group’s co-founder, Dr. James Zogby, said in his introductory remarks, the 2016 Republican Convention called for an “unconventional event for an unconventional election cycle.”

After stand-up sets from comedians Dean Obeidallah and Maysoon Zayid, Harris-Perry (who frequently had Obeidallah as a guest on her MSNBC show) delivered her remarks to a room that, according to the clapping when the comedians asked about it, largely wasn’t supporting Trump.

“I take very seriously [that], to be engaged in the work of democracy is to recognize that you’re going to lose about half the time,” said Harris-Perry, who brought along a group of her students from Wake Forest University. “I like to say that democracy is for losers. Democracy isn’t really for winners. If you expect to win then you should probably prefer authoritarianism, right? The fact is that, if you expect to win and to win all the time, then authoritarianism is just a more efficient form of governance.”

Harris-Perry, who never mentioned any current or erstwhile 2016 presidential candidate by name in her remarks, charged that the idea of multiple sides battling it out in the realm of ideas and cobbling together compromises is “not just some kind of post-modern, millennial, feel-good moment.”

“We have to laugh because we’re human. We have to cry together because it matters. It’s part of our human vulnerability and I am encouraged that we can show up together in Cleveland and show up together in Philadelphia. We can recognize that even when really scary things are happening, we can keep holding on to each other,” she concluded. “… I thank you for letting my students be here, for laughing even when you sometimes want to cry, and for saying that, even if we lose, it doesn’t mean we have to shut up. We can keep talking and, even if the other side loses, that doesn’t mean they have to shut up either. That’s part of the big project of democracy together.”