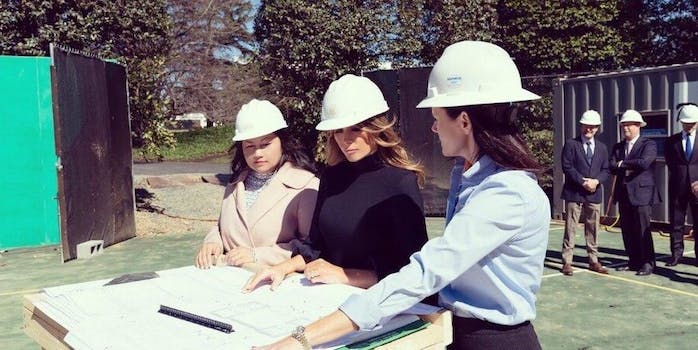 "We're in a pandemic and she's working on a tennis court?"

The stock market is tanking, the planet is staring down the barrel at a pandemic, and Nashville just experienced the most devastating tornadoes in its history. What’s a First Lady to do during such trying times?

Why, tweet excitedly about her new tennis court, of course.

On Thursday, First Lady Melania Trump tweeted, “I am excited to share the progress of the Tennis Pavillion at @WhiteHouse. Thank you to the talented team for their hard work and dedication.”

But between the skyrocketing cases of the novel coronavirus, COVID-19, the drumbeat of criticisms of her husband’s policies and public statements, and worries that the country is teetering on the brink of a recession, these are far from ordinary circumstances.

Some would argue that it’s definitely not a good time to brag about spending the taxpayers’ money on a tennis court. Those people aren’t the First Lady.

Many responding to the tweet accused Trump of displaying callousness on the level of Marie Antoinette while average Americans suffer.

Many criticized both Melania and Donald Trump for their extravagant spending, which they found particularly galling considering Trump’s cuts to social safety net programs like food stamps and Medicaid.

“People are dying for lack of medical care, going to bed hungry, living paycheck to paycheck GOP wants to cut [Social Security] and Medicare,” tweeted @DrDonnaDemocrat. “We’re facing a possible pandemic. But our tax dollars are putting in a tennis court at the White House.”

Mia Farrow tweeted, “29 people were killed by a tornado in Tennessee, the world is shuddering as a pandemic expands and what is a tennis pavilion?”

Others wondered why they would add a tennis court at all, considering that they might not be living in the White House by the time it’s finished. Several pointed out that the 73-year-old president who famously loves all things trans fat isn’t exactly the paradigm of athleticism.

In all honesty, it isn’t that off-brand a move for the First Lady who infamously wore a jacket that said, “I don’t really care, do u?” en route to visit detained immigrant children at the U.S.-Mexico border.