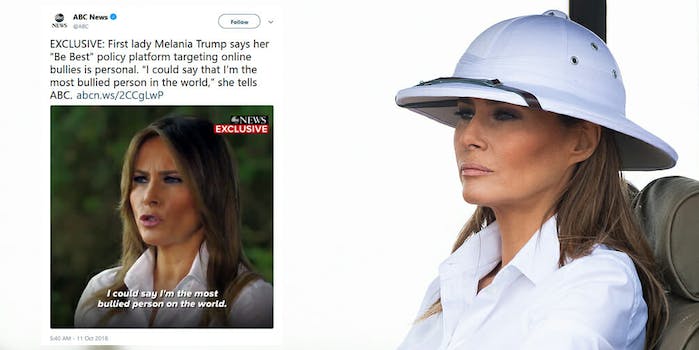 She later clarified that she was 'one of' the most bullied people.

First Lady Melania Trump claimed she was one of the most bullied people on the planet on Thursday during an interview where she discussed her “Be Best” initiative.

“I could say that I’m the most bullied person on the world,” she told ABC News.

When pressed by the reporter interviewing her, the First Lady continued:

“One of them. If you really see what people saying about me. That’s why my ‘Be Best’ initiative is focusing on social media and online behavior. We need to educate the children of social emotional behavior so when they grow up and they know how to deal with those issues.”

EXCLUSIVE: First lady Melania Trump says her “Be Best” policy platform targeting online bullies is personal. “I could say that I’m the most bullied person in the world,” she tells ABC. https://t.co/iiEv5Z3ijv pic.twitter.com/CWZ7g9by27

Later in the interview, Melania Trump also said there were people within President Donald Trump‘s administration that she doesn’t trust—a notion shared by other members of the first family, including Donald Trump Jr., the president’s son.

When asked whether she told the president about her misgivings about some staffers, the First Lady said she gave him her opinions.

“Well, some people, they don’t work there anymore,” she said. “It’s very difficult sometimes because I’m so busy with my office, I don’t get involved with West Wing.”

The First Lady’s assertion that she was one of the most bullied people in the world was not met well online.

Melania calling herself the most bullied person in the world.

Congratulations, Melania, that is the most privileged statement of the year. Perhaps the decade! https://t.co/t7HMV5y85t

The irony of starting an anti-bullying initiative when your husband bullies people every day. https://t.co/FMb3XDZ8Cc

no your not. but bullying needs to removed from society. https://t.co/lglLT18AZ5

ABC News reporter Tom Llamas, who conducted the interview, said the First Lady will address the online harassment she faces in an upcoming segment of the interview.