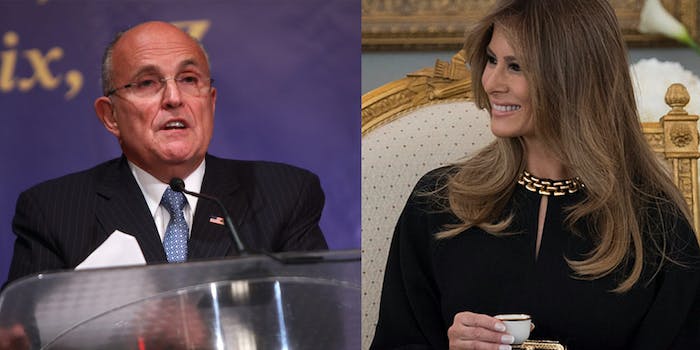 He put words in Melania's mouth.

“I don’t believe Mrs. Trump has ever discussed her thoughts on anything with Mr. Giuliani,” Grisham said.

Yikes. I asked @FLOTUS spokeswoman @StephGrisham45 about Giuliani saying that she believes her husband re Stormy Daniels. Response: “I don't believe Mrs. Trump has ever discussed her thoughts on anything with Mr. Giuliani.”

In a statement to CNN, Giuliani defended his statement.
“I don’t regret saying it because I believe it … Yes I believe that [the first lady] knows him well enough to know this one is—what’s the word, fakakta?” he said, using a Yiddish word meaning a “fouled” situation.
But he also admitted he hasn’t “interviewed” the first lady on the subject.
“I took it as she didn’t want to get involved and get called as a witness or anything like that,” Giuliani said.
At the same conference Wednesday, Giuliani said that he doesn’t “respect” or find Daniels credible because she’s a porn star.
Share this article