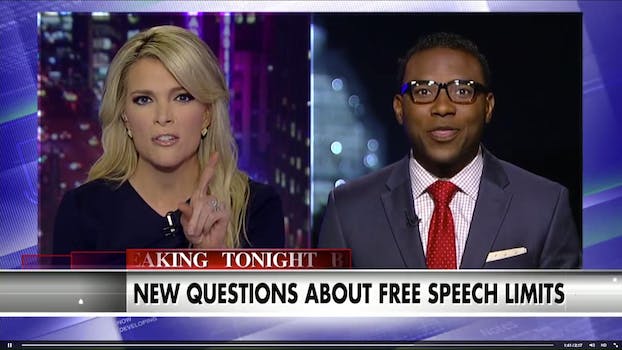 Screengrab via The Kelly File/Facebook

Sometimes, you just have to admit that you agree with something on Fox News.

Megyn Kelly was brought onto the Fox News team to help balance its image and bloodthirsty homophobes, which may or may not have worked. She certainly hasn’t been immune from saying stupid things. Still, when it comes to things said on Fox News, Kelly has a better stupid-to-smart ratio than most of her coworkers. Here, in a debate with radio show host Richard Fowler about the shooting in Garland, Texas, at a contest to draw the prophet Muhammad, she adds to the “smart” number of that ratio:

Kelly pretty much wins the debate by citing the 2011 Supreme court decision, with an 8-1 vote, that the Westboro Church protests were protected under the first amendment—despite offering no useful discourse (or anything else of value). Fowler argues that this event, and its invitation for potential violence, was a “matter of common sense,” and Kelly fires back by saying, “the more offensive the speech, the more protection it needs.”

But this quote took Kelly from winning the debate to her framing the whole argument in a way that Fowler couldn’t possibly recover from:

While the answer to the question might be something we’d find less agreeable, it’s hard to argue with what she’s saying here. When Fowler argues that, without the event, no jihadis would have shown up, the implications are a bit frightening.

After all, what would America look like without people being allowed to be offensive? We’ll leave that brainstorming to the comments section on Kelly’s Facebook post of the video.

Screengrab via The Kelly File/Facebook