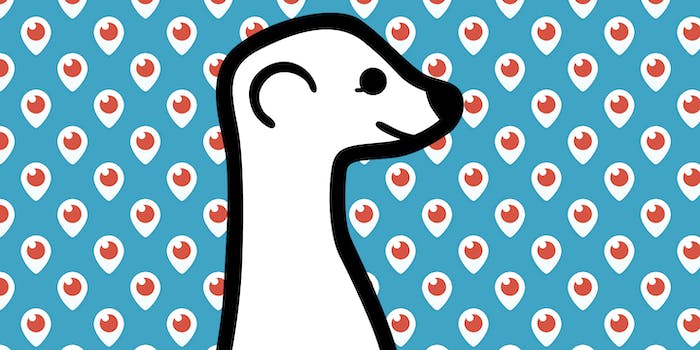 The battle of the livestreaming apps is about to begin

You can't go wrong with either, but you should know about their differences.

Twitter recently announced that it had purchased a little-known livestreaming video app called Periscope. There was something peculiar about the decision, an oddity best illuminated by Periscope’s own tweet regarding its acquisition.

In a flurry of hashtags, Periscope revealed that it had been under Twitter’s wing since January. So why did Twitter decide to tell the world in mid-March about the shiny new toy it has kept on its shelf since the beginning of the year?

It probably has a lot to do with the sudden rise of livestreaming app Meerkat, which might have been a little-used alternative if it hadn’t beat Twitter at its own game and arrived first. Meerkat is quickly becoming the go-to app for Twitter users who want to broadcast events to their followers. Before its user base fell too deeply in love with Meerkat, Twitter had to show off Periscope to make it clear that it had its own plan for livestreaming.

While Periscope isn’t out yet—it’s still in a limited beta and planning a wider release—it won’t have a whole lot of ground to catch up on. Meerkat is getting a lot of ink, but it really isn’t that popular outside of tech-savvy early adopters with thousands of followers and something interesting to broadcast.

Once Periscope goes public, it’ll find itself in direct competition with Meerkat. The question is, which one will you use—and will you even be able to tell the difference?

There’s a lot in common

livestreaming is not new to Twitter; People livetweet events all the time, and links to the most common streaming video sites get tweeted out all the time when people have something to broadcast. Twitch.TV, Livestream, uStream and the like have been around for awhile and have filled their own niches.

What set Meerkat apart when it popped up in late February was the fact that it made streaming so, well, streamlined. It took a thing that already existed, simplified it, and made it as easy as tapping a single “Stream” button.

What makes this possible—and what made Meerkat such a hit right out of the gate—was the app’s seamless integration with a platform that everyone already uses: Twitter.

By building its “social graph,” or network of users, on top of Twitter, Meerkat used the strengths of the microblogging platform—concise, instantaneous communication—as its primary selling point. You hop on Meerkat, hit “Stream” and all of your followers instantly get a link to watch your ongoing video while providing commentary through the platform they are already on. Tweets from viewers pop up like comments from a chat box, and the streamer can see and respond to them.

In this sense, Periscope will largely be the same. Built specifically with Twitter in mind, it will count on users linking their accounts to participate in either side of the streaming equation.

But they’re not identical

Lest Twitter be pegged as copycats, there will be noticeable differences between the two apps, most notably in the levels of refinement.

Meerkat, for all its fanfare, has its share of shortcomings—ones that Periscope plans to address upfront. (An easier prospect for an app with months of development and millions of dollars in funding, as opposed to a start up’s side project.)

The first of Meerkat’s self-imposed rules is “Everything that happens on Meerkat happens on Twitter.” That means every tweet sent to comment on live video goes out into the Twittersphere like any other tweet. Periscope opts not to go that route. While users will sign in with their Twitter credentials and their comments will appear in the feed for the streamer and other viewers to see, those comments won’t go out to the world as normal tweets.

This will clean up clutter in Twitter feeds. Livetweeting a major televised event has built-in context, but comments aimed at a stream with a couple hundred people will seem out of place in the greater river of tweets.

But Periscope’s decision also has the adverse effect of removing some of the free publicity generated by curiosity. The fewer cryptic tweets related to something you’re not watching, the less likely you are to stumble across a stream and sign up for the service.

Periscope aims to get those eyeballs back by advertising streaming events a bit differently than Meerkat. Meerkat streams go only to the followers of the broadcaster, and those followers can then retweet the link to spread it. Periscope will allow users to blast out the link to a public stream or privately share a link among friends like a video component of group DMs.

Whereas Meerkat counts on a serendipitous groundswell to publicize the event, Periscope is more versatile in that it can reach as wide or as narrow an audience as the streamer wants.

Twitter’s new streaming service seems intent to break another of Meerkat’s rules as well: “There are no reruns.”

In the land of Meerkat, there is the original broadcast and nothing else. There’s no way for viewers to re-watch what they saw—which, if we’ve learned anything from Snapchat, means screenshots and video captures will become a hot commodity.

Periscope isn’t so focused on making streams blink-and-you-miss-it events. Streams will be available for replay, with comments streaming in as if they were being written in real time. The experience essentially recreates the entire stream and compiles it for re-watching.

One of the primary rules that Periscope will hopefully keep is Meerkat’s motto “Be kind.” It seems like it intends to, with a heart feature that allows viewers to express their appreciation for the broadcaster.

When Meerkat launched as a Twitter-centric streaming service, that was a huge selling point for it. Now it’s starting to look like a real disadvantage, because Twitter sees no reason to play nice with the third-party startup.

Twitter is notorious for cutting off external operators by limiting access to its “firehose,” the fast-moving stream of global public tweets. Meerkat is starting to feel Twitter’s wrath in a different way, as the little blue bird has cut off Meerkat’s access to its social graph, making it harder for users to discover streams.

While Twitter does its best to step on the throat of the little guy that got there first, the company will be sure to give Periscope every advantage imaginable in an attempt to convert existing Meerkat-ers and attract new users who spot Periscope streams in their feed.

There’s plenty of evidence that Twitter is desperate to make video work on its platform. The company added a video feature earlier this year that made it possible to capture and upload video right from the Twitter app. It also owns Vine, the six-second snippet service.

Both Twitter Video and Vine can be played from within Twitter instead of forcing users out into a web browser. If Periscope operates similarly while Twitter banishes Meerkat to the grounds outside its gated community, it could be a huge advantage for Periscope.

Right now, Meerkat wins, because it’s the one that you can actually use. It got off the ground and picked up steam fast enough that it forced Twitter to act. It is already bigger than Twitter would like it to be.

Of course, if Twitter had pushed Periscope out into the world earlier instead of spending so much time polishing it up, Meerkat might have never come to be.

In the long run, it’s hard to imagine Periscope not overtaking Meerkat, simply because Twitter can will it to popularity by inconveniencing Meerkat and its users as much as possible.

That being said, Instagram is still huge on Twitter, even though photos and videos from that service aren’t viewable on the timeline. And Facebook’s check-in feature still hasn’t killed Foursquare.

In the end, though, it won’t matter which service has the most users or installs or downloads. What matters is that the technology for livestreaming is better than ever and accessible to just about anyone.

Both Meerkat and Periscope represent a huge step forward, and if recent events in Ferguson are any indication, we’ll be seeing the world in real time through many new eyes very soon.