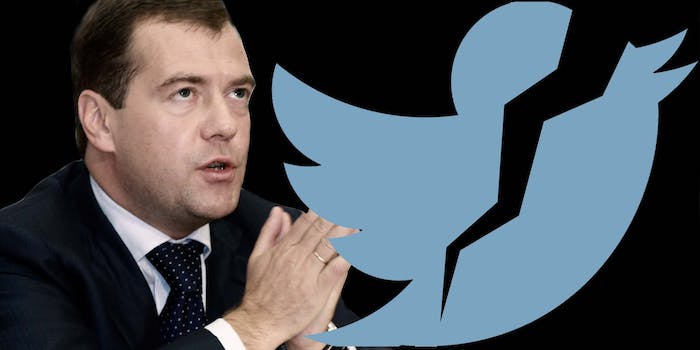 The tweets were quickly deleted

Russian Prime Minister Dmitry Medvedev is planning to resign and become a freelance photographer—at least, that’s what you might think if you’ve been reading his Twitter account recently.

Medvedev’s Russian-language account was hacked this week and sent out numerous messages highly critical of the government, with a Russian hacking group claiming responsibility.

The first tweet sent by the compromised account read “I resign. I am ashamed for the actions of the government. I’m sorry,” reports Russia Today. This was followed up by another saying “I’ll still be a freelance photographer.”

Business Insider reports that another reads: “Maybe better to ban electricity? Promise in the future the government and think about it. But without me.” The hackers also had Russian President Vladamir Putin in their sights, tweeting from Medvedev’s account “Vova! You are wrong!”—with Vova being a nickname for Putin.

Russian hacking group Shaltay Boltay have claimed responsibility for the hacked tweets on their own (Russian-language) Twitter page—with one of the messages they sent reading “Russian citizens shouldn’t suffer from the problem of common sense in the top leadership of the country.” Shaltay Boltay is Russian for Humpty Dumpty, the BBC reports, and the group’s website was blocked by the Russian government in July.

Two more tweets sent by Shaltay Boltay include “Crimea isn’t ours. Please retweet,” and “We could return to the 1980s. That is sad. If that is the objective of my colleagues in the Kremlin, they’ll achieve that quickly,” reports The Independent.