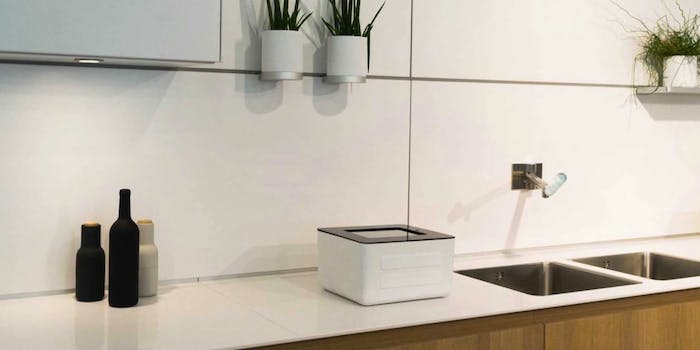 3D-printing the meat you eat could save the world

This is a meat printer. Times are strange.

When we talk about the human race’s impact on the environment, we usually discuss oil and coal, cars and power plants. A pair of German design students have turned their focus to another area of climate change that humans rarely think about: our reliance on meat.

That led Sarah Mautsch and Aaron Abentheuer to create the concept for the Cultivator, a home kitchen printer for “bioorganic printing.” In other words, a meat printer.

The aim of the design team is to reduce the environmental impact from the meat production process. According to the Food and Agriculture Organization (FAO) of the United Nations, carbon emissions from crop and livestock grew by over 14 percent from 2001 to 2011. The largest source of greenhouse gas emissions in agriculture is enteric fermentation, in which “methane is produced by livestock during digestion and released via belches.” Livestock also accounts for over 14.5 percent of all human-caused emissions.

Raising animals for food also has a sizable impact on the water supply, accounting for one-third of all freshwater consumption.

With the population of the planet on the rise and little indication there will be a global push to switch to vegetarianism or veganism, the Cultivator may be the next best bet. Though simply a concept device with a basic mock-up at the moment, a finished version would produce cruelty-free meat while cutting 85 percent of greenhouse gas emissions from the process.

The meat-making box will provide users with a customized meal plan based on taste preferences and nutritional needs. Recipes from chefs, friends, and family can also be used. Based off of the inputted information, users can print out their sustenance.

Of course, it’s not going to come out looking like a restaurant-served meal with fancy dish dressings and an Instagram-able look. It’s going to be an unidentifiable slab of something meat-like. The texture will be customizable, including the consistency and color.

Though just an idea at the moment—you can see the design on GitHub—the Cultivator has the potential to put a dent in our meat-centric diets to mitigate the environmental impact while still providing the nutrition needed. The only sacrifice you’ll have to make is knowing that your printed sushi and printed steak are probably going to come out in the same shape.