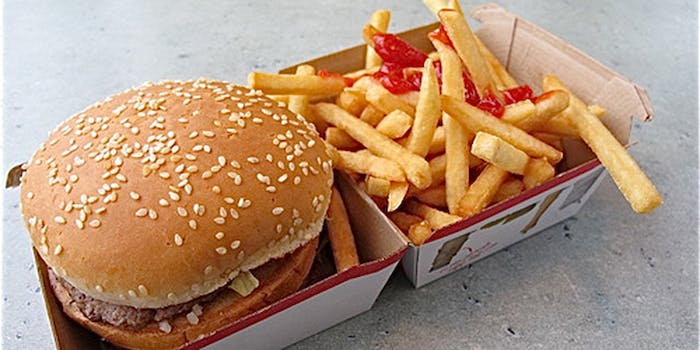 You may now resume sticking french fries up your nose.

Apparently, delinquent teens have been a problem of late at a McDonald’s location in southeast London’s Sidcup neighborhood—so management decided to do take a stand. Earlier this week, a misspelled sign was spotted in the window: “NO YOUTHS WILL BE SERVERD [sic] AFTER 7PM,” it read.

SIDCUP: “NO YOUTHS” sign seen at MacDonald’s in Sidcup. Outrageous! And so’s their spelling! pic.twitter.com/lcw4MBHxNN

Predictably, this vague, illegal, and otherwise unenforceable fiat was met with ridicule and hostility on Twitter. The policy was especially galling since the latest newsworthy incidents at the fast food restaurant involved adult men (one tried to steal a chair and called a policewoman a “slag,” while the other burst in waving a samurai sword.)

WOT WERE NOT ALLOWED TO GET SERVED IN SIDCUP MCDONALDS DPMO

The way gavers in sidcup trying to ban bods from sidcup and guard mcdonalds. Lol, lets see how this turns out. goodluck #sidcup #feds #mcds

Word has gone out to the youths of #sidcup especially the one inside mcdonalds who decided to give my PCSOs grief..£90 fine and humiliation

It wasn’t long before McDonald’s HQ stepped in, with a spokeswoman reaffirming the franchise’s “family-friendly” atmosphere:

On Saturday evening, the restaurant experienced problems with a group of individuals causing sustained disruption to the restaurant, affecting fellow customers and employees. As a result, following consultation with local police, the restaurant management took urgent steps to try and prevent repeat anti-social behaviour. The wording of the initial signage displayed in the restaurant was incorrect and we apologise for any confusion caused.

A victory for the kids—but of the hollow sort:

Oh the youths of Sidcup. Find something better to do than hang around in McDonalds.

Problem is, there’s no Burger King nearby.