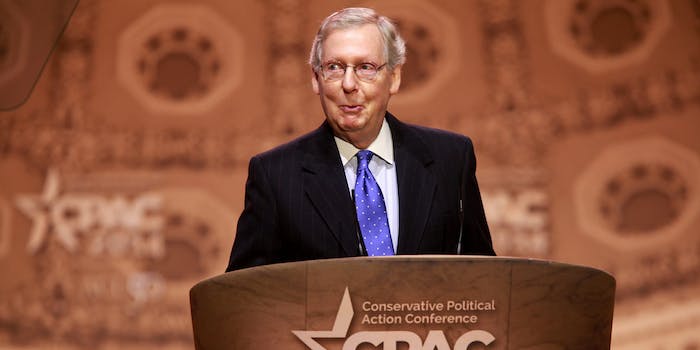 Mitch McConnell bucks Trump: ‘Most news is not fake’

The Senate majority leader is breaking with the president on 'fake news.'

The Senate majority leader told the Louisville Chamber of Commerce that “most news is not fake,” putting himself directly against Trump’s much-repeated claims of “fake news” for stories he does not view favorably. The “fake news” cry has resonated with his supporters and, in some instances, has had some real-world consequences.

McConnell was asked about where he gets his news each day while speaking with the chamber of commerce on Monday, Politico reports. During the discussion, McConnell said he did not have any issues with finding reliable news sources.

“What I do every morning—there a couple of services I look at that gives me a synopsis of articles,” McConnell reportedly said. “It is my view that most news is not fake. But I do try to look at a variety of sources.”

The senate majority leader’s remarks about the media came on the same day that Trump made yet another swipe at the media on Twitter.

“Thank you, the very dishonest Fake News Media is out of control!” Trump wrote, retweeting a supporter who was critical of the news media.

Thank you, the very dishonest Fake News Media is out of control! https://t.co/8J7y900VGK