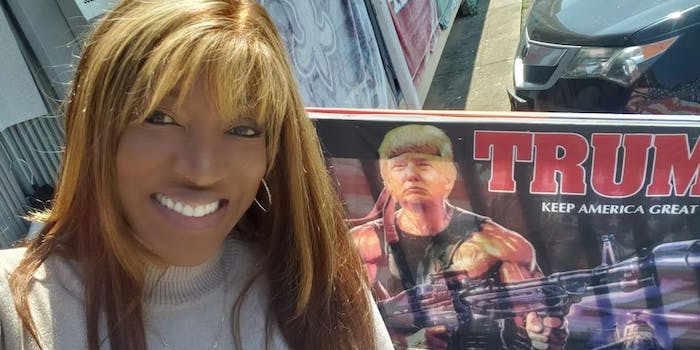 She's a huge Trump supporter, too.

Thursday night’s dueling town halls in lieu of a second presidential debate created an unlikely star. The audience was enthralled with a woman sitting directly behind President Donald Trump and nodding eagerly along with everything he said throughout the hour-long event.

Conservatives, of course, loved it.

Many on the left tweeted disparagingly about the woman, who was quickly dubbed the “nodding lady.” Someone even created a Twitter account for the mysterious woman about whom little was initially known. The sum total of the public knowledge about her at first was an assumption that she is Black and likes what Trump has to say.

It didn’t take long for the furor to produce a name: Mayra Joli. The Miami Herald reports that Joli is an immigration attorney who unsuccessfully ran for Congress in South Florida as an independent in 2018, a race in which she was reportedly endorsed by a local branch of the Proud Boys. She’s also a pundit on a Spanish-language television.

According to her social media presence and public statements, Joli is an adamant Trump supporter. She told the Herald that Trump inspired her Congressional bid.

Who is Mayra Joli?

Picture after picture after picture on social media show Joli posing in Trump campaign gear, at Trump-branded properties, and repeating Trump party lines that some may find surprising for a Black woman who is reportedly an immigrant from the Dominican Republic. On Oct. 11, Joli posted photos of herself with Donald Trump Jr. on a Facebook account that appears to belong to her.

Two Twitter accounts that purportedly belong to her contain similar images and pro-Trump, as well as far-right, sentiments.

Posts on Joli’s social media accounts indicate that in addition to being extremely pro-Trump, she holds far-right views.

On Facebook, where Joli is particularly prolific, she’s posted approvingly about the Confederacy, once even suggesting that descendants of freed slaves should pay descendants of Union soldiers who died in the Civil War.

She’s defended the police officer who’s been charged with the murder of George Floyd, whom she disparaged in a separate post. Joli has also tweeted disparaging comments about Floyd and other Black people whose deaths at the hands of police inspired civil rights protests nationwide earlier this year.

Her posts indicate that she’s also an anti-masker. In May, she posted a meme on Facebook calling the coronavirus a “scam.”

Once her identity was revealed, Trump supporters wasted no time congratulating their new heroine.

People who oppose the president, naturally, took the opposite track.

On Facebook, Joli seemed unfazed by the sudden fascination with her. “#nodding lady will send you crying to #nothinghill,” she posted early Friday.