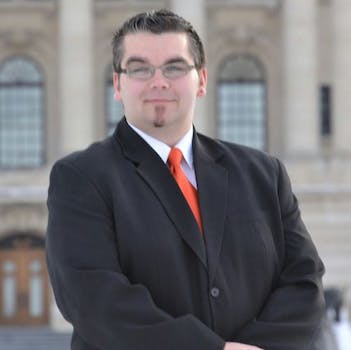 Canada's Chad Novak is trying to run an online campaign, but he's struggling to have his voice heard on Twitter.

Chad Novak just can’t seem to get his message out—at least not on Twitter.

Novak is running for mayor in Regina, the capital city of the Canadian province of Saskatchewan, with a predominantly online campaign. He answers questions via email, regularly updates his Facebook page, and outlines his plans for “progressive change” on his blog.

Yet, his Twitter account has been suspended at least twice after being marked as spam by others. While his account’s been reinstated, the certified management accountant has other Twitter issues to deal with.

He claims that at least 50 Twitter accounts have been set up to discredit him and his campaign.

“It became very apparent, very rapidly, that there were people in this City who did not like the fact that there seemed to be ‘true’ competition to their, then assumed, ‘shoe-in’ to be the next Mayor of Regina,” Novak told the Daily Dot.

There has been a recent surge in Twitter users being suspended from the service after apparently being wrongfully reported as spam. The tactic, which manipulates Twitter’s automated systems for managing spam, is thought to have led to the temporary removal of users Leah Sargent, editor of the site Misfit Politics, and Chris Loesch, the husband of a conservative talk-radio host. Twitter has not responded to requests for comment on the issue.

The first fake Twitter account he recalled seeing was @FakeChadNovak, which still boasts a little more than 200 followers and tweets missives such as “I have determined that I have the same odds of getting elected as Tim Tebow has of losing his virginity to Chaz Bono. #3.7% ‪#likemychances.‬”

Novak blocks these accounts when he sees them, which, he said, led to the hashtag #blockedbynovak trending locally. While he believes many of them to be “comical” most of the time, there are a few occasions where the accounts have “crossed the line of good taste.”

There’s no evidence that Novak’s opponents are behind the Twitter accounts or the false spam reports that led to his account suspensions. However, he certainly has suspicions that those involved in the current mayor’s administration are playing a role.

Whether online or in council chambers, politics can be a shady game.

“It’s the 21st Century, and politics has always been dirty,” Novak said, “but that kind of dirty activity is best left at the federal level.”