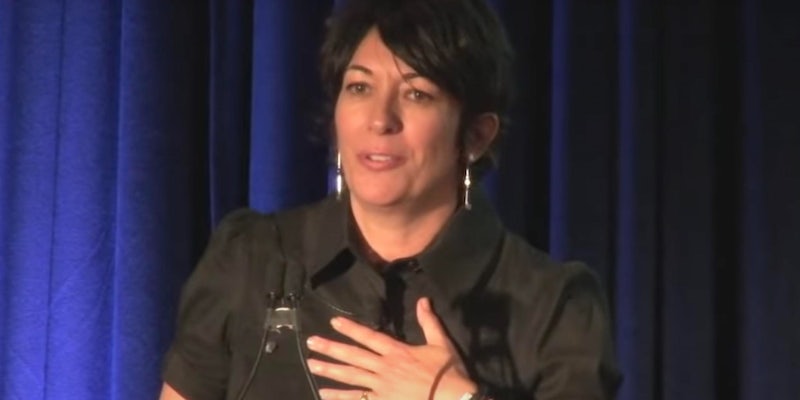 The claims received thousands of retweets despite being provably false.

British socialite Ghislaine Maxwell faces decades in prison after being convicted on Wednesday of grooming underage girls for deceased sex offender Jeffrey Epstein and his cohorts to abuse.

Yet despite the ruling, which saw Maxwell convicted of five of the six counts against her, conspiracy theorists immediately began spreading claims that the case had been nefarious in nature.

Jack Posobiec, a popular far-right conspiracy theorist, responded to the verdict by alleging that all information regarding the sex trafficking case would be hidden from the public.

“Ghislaine Maxwell has been found guilty,” he tweeted. “All details of Epstein’s Network ordered sealed.”

As is often the case, Posobiec did not provide any evidence to back up the claim. That didn’t stop other far-right figures from sharing the tweet uncritically.

Rep. Marjorie Taylor Greene (R-Ga.) likewise amplified the allegation in a tweet in which she criticized the government committee currently investigating the Jan. 6 Capitol riot.

Avi Yemini, a correspondent for the conspiratorial website Rebel News, where Posobiec once worked, was also one of the more prominent figures to repeat the allegation.

“Ghislaine Maxwell found guilty but judge orders all details on Epstein’s Network to be sealed. In summary: It’s worse than all the ‘conspiracy theories,'” he said.

The Daily Dot reached out to Yemini to ask whether he had a source for the claim or had merely repeated Posobiec but did not receive a reply by press time.

Posobiec also praised himself in a separate tweet for allegedly predicting that a coverup following Maxwell’s verdict would hide details of Epstein’s network.

“My call from the start has been that they want Maxwell locked up, everyone gagged and everything sealed, and never to speak of the Epstein Network again,” he tweeted.

But Posobiec’s vague claim that all details surrounding the case had been sealed is not true. Although some aspects will undoubtedly remain private given the involvement of minors, other information has long been widely available.

Klasfeld, who has been reporting on the Maxwell’s trial daily from the courthouse, noted that information regarding the case has already been public.

“I’m not quite sure what that even means, but insofar as I can make sense of the claim, it’s easily disproven; quite a bit of information about Epstein’s associates is already in the public record,” he said.

In fact, Klasfeld pointed to news that had likewise broken on Wednesday regarding a federal judge that had “ordered the unsealing of a 2009 settlement agreement that Prince Andrew has claimed insulates him from a civil lawsuit” over accusations he sexually abused a 17-year-old girl.

Prince Andrew, a senior member of the British royal family, was a longtime associate of Epstein but has repeatedly denied sexually abusing underage girls.

Documents related to Epstein and Maxwell have been repeatedly unsealed in the past. In just one instance, a federal judge back in July of 2020 unsealed hundreds of pages of deposition transcripts and other documents related to a settled defamation suit against Maxwell.

It remains unclear where Posobiec’s claim originated from.