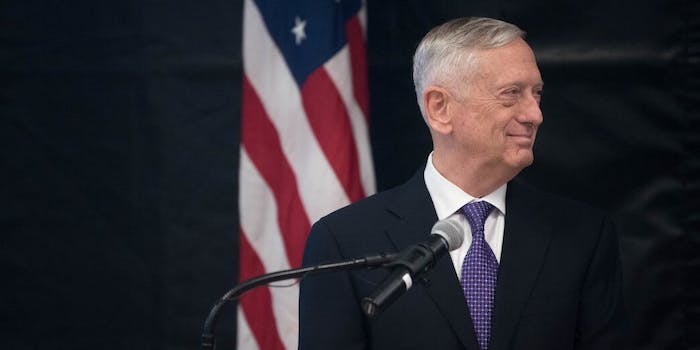 An eloquent but scathing excerpt from the upcoming book by former Secretary of Defense Jim Mattis takes President Donald Trump to task on multiple fronts.

In the essay published in the Wall Street Journal, Mattis issues a rebuke of Trump’s isolationism and leadership style, as well as the nation’s divisive political climate.

“Nations with allies thrive, and those without them wither. Alone, America cannot protect our people and our economy,” Mattis, a retired four-star Marine Corps general, writes. “…A polemicist’s role is not sufficient for a leader. A leader must display strategic acumen that incorporates respect for those nations that have stood with us when trouble loomed.”

He urges America to return to its “strategic stance that includes the interests of as many other nations as we can make common cause with,” opining that this will better preserve our interests and those of the world at large. “Absent this, we will occupy an increasingly lonely position, one that puts us at increasing risk in the world.”

These and other passages include shades of Mattis’s resignation letter. Known as one of the “adults in the room” in the Trump administration, many were stunned and alarmed when he resigned from the post last December.

In a somewhat rare move, Trump heaped praise on Mattis when tweeting news of his departure, casting it as a retirement rather than a resignation. The following day, Mattis released a resignation letter contradicting Trump’s classification of the move, criticizing the administration’s international policies.

Reactions to the excerpt from the upcoming book, Call Sign Chaos: Learning to Lead, which Mattis penned with co-author Bing West, who served as an Assistant Secretary of Defense under President Ronald Reagan, ran the gamut.

“How brave of Mattis to write a strongly worded letter 9 months after he could’ve done anything meaningful,” one person snarked on Twitter.

“Mattis enabled the policies of cruelty and bigotry that are causing the division he’s “concerned” about now—and he’s still personally profiting off them. He knew it all along, too. A book tour isn’t a redemption,” another said.

“Jim Mattis warned us when he resigned. He’s warning us again. But he thinks it’s inappropriate for him to play a political role. Will no current Republican members of Congress step up to say we can and must do better than Trump? Has even minimal political courage become so rare?” Defending Democracy Together director Bill Kristol tweeted.

Read this essay from former Secretary of Defense Jim Mattis. It will give your Wednesday a shot of energy, optimism, determination & joy. https://t.co/lorf521Pfc

At the end of the passage, Mattis issued a dire warning about the current state of American political discourse.

“What concerns me most as a military man is not our external adversaries; it is our internal divisiveness. We are dividing into hostile tribes cheering against each other, fueled by emotion and a mutual disdain that jeopardizes our future, instead of rediscovering our common ground and finding solutions.”

Mattis concludes by urging unity, and that the nation aspire to live the motto inscribed on our coins: “’E Pluribus Unum’—from many, one.”