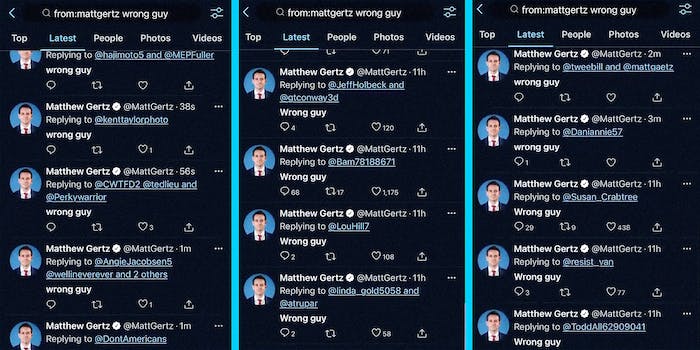 One is a senior fellow at Media Matters; the other is a member of Congress.

Matt Gertz, senior fellow at Media Matters for America, has the unfortunate curse of having a similar name and handle as one of the most notorious members of Congress: Rep. Matt Gaetz (R-Fla.).

Every few weeks, Gaetz’s name explodes in the news—often for something he tweeted or said. The Fox News frequent offender and staunch defender of former President Donald Trump has a knack for making headlines.

Gaetz is presently at the center of a scandal about an alleged investigation into his purported sexual relationship with a 17-year-old, which he claims is false and actually part of an attempt by a former Justice Department official to extort him and his wealthy family.

For Matt Gertz, every news cycle dominated by the man who pressed charges against a woman for throwing a slushy at him sets a familiar pattern in motion: people on Twitter confusing the two.

Gertz’s mentions are full of people trolling on the wrong person.

Gertz has an admirable sense of humor about the frequent mix-ups. Rather than get angry or clap back, he responds to tweets cursing at him, calling him terrible names like “child molester,” and accusing him of “running scared“—all of which are obviously intended for Gaetz—with two words, “wrong guy.”

To combat the confusion, Gertz has even added to his bio, “Definitely NOT the GOP congressman.”

Alas, people on Twitter can’t be bothered to confirm they’re tagging the right person, which should be easy given that their names aren’t spelled the same.

Gertz’s followers and even family have learned that every time Matt Gaetz starts trending, Gertz’s mentions are about to blow up in a bad way.

After news of the investigation into Gaetz broke on Tuesday, Gertz posted a screenshot of a text from his father with a link to the New York Times story about it. “Your life is hell,” his father wrote.

Gertz can take some solace in the fact that, while it may genuinely suck for people to think you had dinner with Tucker Carlson, it could be much, much worse.