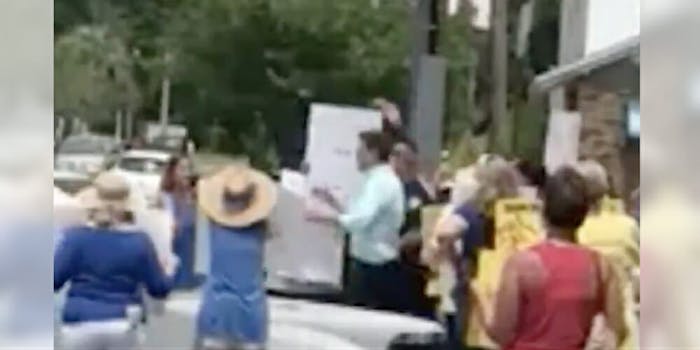 Rep. Matt Gaetz (R-Fla.) just became the latest politician to be hit with a milkshake.

Gaetz was leaving a town hall event on Saturday afternoon in Pensacola, Florida when a 25-year-old woman named Amanda Kondrat’yev threw a milkshake at him. A bystander caught the incident on camera.

Gaetz released a statement on Twitter and has been retweeting supportive messages from his followers ever since.

Clearly it takes more than a drink to slow down our great team.

We are always thankful to the brave law enforcement officials who keep everyone safe at our events. https://t.co/njWuBquiRs

What is wrong with the American left?

Where are the anti-war champions on the left and why aren’t they PRAISING my congressman @mattgaetz? https://t.co/0RZsZK693f

Kondrat’yev, who is a Democrat, previously ran for Gaetz’s seat in 2016 but lost.

According to WKRG, Kondrat’yev was arrested and charged with battery. She has since been released on $1,000 bond.

Several far-right U.K. politicians have been at the receiving end of milkshake dumpings recently. The movement is even being promoted on social media with the hashtag “SplashTheHash.”

Now the movement seems to be spreading to the U.S.

Gaetz first made national headlines after seemingly threatening Michael Cohen before he was set to testify before the House Oversight and Reform Committee. It was then announced that Gaetz is under investigation by the Florida Bar for potential witness tampering.