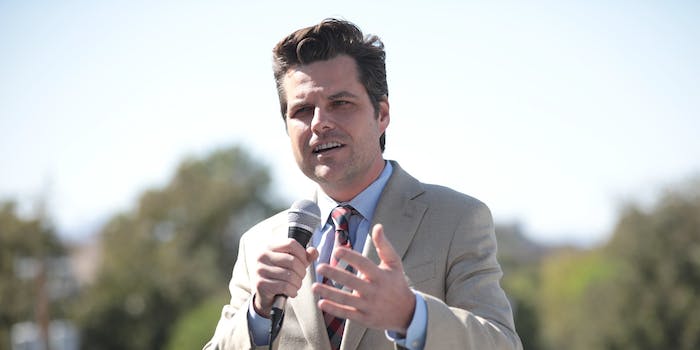 The alleged extortion attempt by three men, one a former federal prosecutor (and none of whom are talking now), occurred last month. Trump’s term ended in January.

The former prosecutor scoffed at Gaetz’s accusation, according to the Daily Beast, and said that Gaetz was trying to distract from his impending arrest. Gaetz and his father subsequently produced some evidence that lent credence to the extortion claim.

Wilder still, the Washington Examiner reports that the alleged purpose of the $25 million the trio were purportedly seeking was to secure the release of an American imprisoned in Iran.

It’s a strange series of events, even in Florida.

Many, including Republicans, have been waiting for Gaetz to get caught up in some kind of scandal. The Daily Beast reports that his penchant for illegal drugs, drinking, and young women is so well-known that even some in his own party consider him toxic.

Gaetz insists that his partners have all been of age. “I have definitely, in my single days, provided for women I’ve dated,” he told Axios. “You know, I’ve paid for flights, for hotel rooms. I’ve been, you know, generous as a partner. I think someone is trying to make that look criminal when it is not.”

The Daily Dot examined Gaetz’s campaign finance records on the Federal Elections Commission website. According to the FEC, his campaign has spent quite a lot of money on travel, luxury resort stays, fine dining, and gifts. It’s not clear whether such expenditures were for Gaetz himself. FEC records show that he’s spent roughly $60,000 on lodging and meals alone since 2017.

Here are some other things we learned:

Matt Gaetz is the only member of Congress who’s paid for lodging at Mar-a-Lago.

According to FEC records, Gaetz stayed at Mar-a-Lago twice last February to the tune of $2,000. (He spent another $2,700 in meals and rooms at Trump’s Washington, D.C. hotel.)

During his presidency, Trump directed hundreds of thousands of dollars in campaign and federal funds to his flagship resort that is now his current residence.

But only one other lawmaker, Rep. Roger Williams (R-Tex.), has dropped a dime at the South Florida resort from campaign coffers since 2016, and that was on an event. This means that all the other Republicans who traveled to Mar-a-Lago to kiss Trump’s ring paid out of their own pockets, stayed elsewhere, or had their rooms comped.

Gaetz has spent thousands on gifts.

One of the gifts was Donald Trump Jr.’s book, Liberal Privilege. Gaetz spent $11,000 on copies, the Daily Beast reports, which records show were for “supporter gifts.” Because nothing says, “Thanks for that $9,400 donation” like an $11.07 hardbound copy of Trump Jr.’s ruminations on the privileged lives of liberals.

Ever generous (with other people’s money), Gaetz has spent nearly $40,000 on gifts since 2017, including nearly $10,000 for supporter gifts from Books-A-Million two weeks before Trump Jr.’s prior missive, Triggered, published. Wonder what he bought.

He’s a creature of habit.

When he finds a hotel he likes, Gaetz tends to be a repeat customer. He’s paid for multiple stays at Balboa Bay Resort, Doral Golf Resort & Spa (a Trump property), Sandestin Golf and Beach Resort, and the more economical Westin Lake Mary.

On multiple occasions, such as the stays at the Disney Resort and Hilton Garden Inn in 2018, Gaetz’s campaign paid two separate transactions for lodging on the same day.

With victory all but certain, he cleaned up on WinRed.

According to the FEC database, as of Oct. 18, Gaetz hadn’t collected a single dollar from WinRed. Beginning on Oct. 19, Gaetz’s campaign received a windfall from the Republican fundraising platform, with more than 100 donations ranging from $6,500 to more than $30,000 in the last two weeks before the election.

On Nov. 3, he received a single-day total of over $1.3 million. That’s a lot of money for a district that’s such a deep shade of red that Gaetz won nearly two-thirds of the vote.

His family hasn’t donated to him since 2017.

Donating to family members is customary in political families like the Gaetzes. In 2016 and 2017, Gaetz’s parents and sister dutifully complied.

While it’s possible they’re donating under a business name, since October 2017, the FEC database shows that no Gaetz has donated to the congressman’s account. Not even Matt Gaetz.

Much like Trump, on whose coattails he rode to Congress, Gaetz has come this far by playing things fast and loose. This time, he may have finally tied himself in knots.