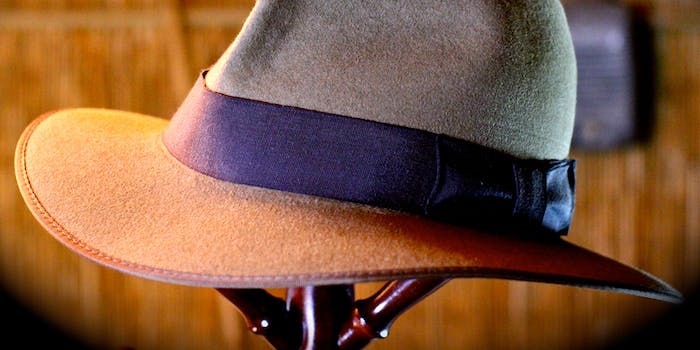 Just in time for Election Day.

Earlier this year, right-wing Internet news kingmaker Matt Drudge stood athwart Twitter yelling stop. Drudge first joined Twitter in 2011, but this May, he erased all of his tweets save for one, which read “In this manic Digital Age… It’s vital… To clear your mind… Constantly…”

Then, silence. Drudge eventually deleted even that missive, replacing it a few months later with something equally cryptic, “self-quarantine.”

Some speculated that “self-quarantine” had to do with Ebola, while others merely hoped those speculators were correct because the mental image of Drudge retiring to his panic room with nothing more than a laptop and a selection of hatboxes was hilarious. The Drudge Report’s official twitter continued blasting out headlines, but Drudge’s own personal account remained inactive.

But then, on Election Day, a revelation. Cue the blaring red and blue siren that the man himself had rendered iconic. Drudge was back on Twitter and he had something to say.

According to Mediaite, on the eve of Nov. 4, Drudge tweeted a series of leading questions on topics like the questionable level of independence Independent Kansas Senate candidate Greg Orman will have from the Democratic Party, how the pig-castrating Iowa Senate hopeful Joni Ernst is poised for GOP super-stardom, and how Florida’s Republican-turned-Democrat gubernatorial candidate Charlie Crist’s name is only letter away from being Charlie Christ.

However, by the time voters were lining up to cast ballots the next day, all of those questions had been deleted. Instead, they were replaced by a single statement.

The meaning of this message is, at best, unclear.

It could be a despondent shrug at what even the combination of a Republican-led House and Senate can accomplish when the party leadership’s relationship with President Obama has frayed to the breaking point. Or it could be a reference to the long-threatened lawsuit that House Republicans have been looking to file against Obama for his use of executive actions. That suit has faced a series of high-profile stumbles, such as House Speaker John Boehner having considerable difficulty finding a law firm willing to take the case.

Or, maybe Drudge’s tweet could just be referring to this:

.@DRUDGE obama gonna poop in that hat and make u wear it.