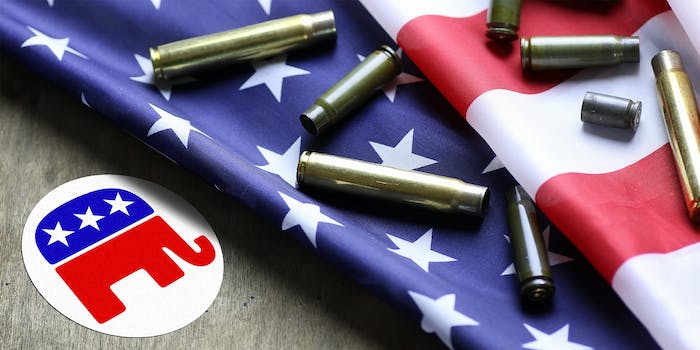 The GOP blames gun violence on mental health. So, why do they push policies that hurt patients?

Whenever there is a mass shooting, and it comes time to face the press, Republicans haul out their favorite straw man: mental health.

Following the recent mass shooting at a church in Sutherland Springs, Texas, President Donald Trump followed the GOP playbook to a tee. He called mass shootings a “mental health problem at the highest level” and not a “guns situation.” After the historic carnage in Las Vegas last October, Speaker of the House Paul Ryan said, “Mental health reform is a critical ingredient to making sure we can try and prevent these things from happening.”

Though it is actually possible to focus on two things at once, it would be nice if Trump and congressional Republicans moved to improve the nation’s mental health situation. Unfortunately, the GOP has proven time and again they don’t actually care about mental health.

A large percentage of the nation’s mental health needs are paid for by Medicare and Medicaid. Medicare is government run healthcare for Americans over 65. Medicaid provides medical coverage to low-income people, pregnant women, children, and people with disabilities. Medicaid is the single largest provider of mental health services in the nation. In 2015, 21 percent of mentally ill Americans were on Medicaid; 26 percent of Medicare recipients (approximately 13 million people) experience some mental disorder.

Any improvements to the nation’s mental health system would have to involve increased funds for these programs. Yet, the version of the Republican tax plan released on Tuesday would cut Medicare by $25 billion. Some Republican lawmakers like Pennsylvania Sen. Pat Toomey have said that the GOP wouldn’t let such cuts happen, but as of yet, they haven’t announced a plan to stop them.

Additionally, the Republican tax proposal would eliminate the Obamacare mandate. The mandate, which penalizes those who don’t buy a plan, is not well liked. However, the purpose of a mandate is to encourage those who wouldn’t otherwise participate to buy into the system. Though the Affordable Care Act is government run, it is still market-based. It is essential to have some kind of mandate to stabilize the market, or premiums would skyrocket. If millions of people leave the market, healthcare costs would rise sharply for those who remain, including those with mental health issues. Additionally, it is certain that many people who would choose to do without insurance would have mental health issues; the CBO estimates 13 million people would lose coverage should the mandate be repealed.

This is just the latest in a set of attacks by the Trump administration and their fellow Republicans on mental health. In October, Trump ordered the end of ACA subsidies that were put in place by an Obama era executive order. In ending those subsidies, Trump also put an end to some ACA requirements around mental health. Obama’s executive order required ACA plans to offer a specific set of mental health services to be admitted into marketplaces. Insurance companies will no longer be required to do so. This means that the mentally ill may end up buying plans with insufficient mental health coverage.

It isn’t just Trump who is restricting care for the mentally ill. Under the ACA, Medicaid was expanded. It is estimated that more than 1.3 million Americans have gained mental health services thanks to the ACA. Those 1.3 million live in only about half of the US, as many states chose not to participate in Medicaid expansion. The states that opted out of Medicaid expansion did so thanks to Republican lawmakers in those states.

In Maine, where Medicaid expansion was just passed, we’re seeing just how far Republicans will go to deny help to those who need it most. Governor Paul LePage responded to 60 percent of his state voting for Medicaid expansion by announcing he would attempt to block the referendum. LePage’s released a statement in which he called Medicaid expansion “fiscally irresponsible” despite its success in over 20 states and vowed to fight against the will of the people.

In the various versions of the failed American Health Care Act (AHCA) that have floated through the House and the Senate, Republicans have consistently attempted to assault mental healthcare. Both House and Senate versions of the bill would have cut Medicaid by $1 trillion over a decade. If the bill had passed, it would have also undermined a relatively modest mental health bill that was passed towards the end of the Obama administration. That legislation marked the only serious attempt to address mental illness by the GOP in recent memory. It will likely continue to be assaulted by Trump era cuts.

While Republicans have attacked mental healthcare in the country, they have also made it easier for the mentally ill to purchase guns. Under Obama, a law was passed to require “the Social Security Administration to report the records of some mentally ill beneficiaries to the FBI’s National Instant Criminal Background Check System.” After the Senate passed the repeal 57-43, Trump signed it into law, rolling back mental health background check standards to 2007 levels. Though the 20007 bill did create stricter background checks, according to Mother Jones, there have been 54 mass shooting since the 2007 bill was passed.