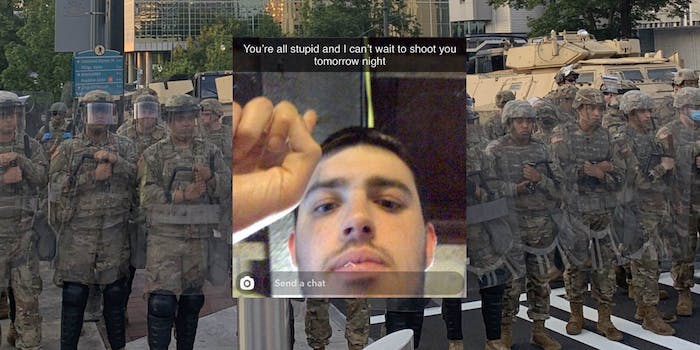 'You're all stupid and I can't wait to shoot you tomorrow night.'

A man reportedly from the Massachusetts National Guard appears to have threatened to shoot protesters in a post on social media.

Screenshots of a Snapchat user named “Spence” purport to show an individual stating that he intends to open fire on demonstrators. The images have been circulating on Twitter as users have tried to identify him.

“Fuck your riots. Bullshit ass motherfuckin shit,” the message says. “You’re all stupid and I can’t wait to shoot you tomorrow night.”

The alleged identity of the man has circulated online, although confirmation of his involvement has not been made.

The report raised concern given the presence of Massachusetts National Guardsmen in Boston, the site of widespread protests over the police killing of George Floyd.

While specifics weren’t provided, Maj. Gen. Gary W. Keefe, the Adjutant General for the Massachusetts National Guard, released a statement Tuesday regarding “inflammatory & insensitive comments” made by a soldier.

“I’ve taken immediate action to address a Soldier’s inflammatory & insensitive comments made regarding the protests of George Floyd’s death,” Keefe wrote. “The MA National Guard holds its service members to high standards. These comments are not in keeping with our values & will not be tolerated.”

The Daily Dot reached out to the Massachusetts National Guard to confirm whether Keefe’s statement was in reference to the man’s alleged post but did not receive a reply.

The Massachusetts National Guard later released a statement mirroring Keefe’s but likewise did not reveal the identity of the alleged offender.

It did say, however, that an individual was placed on “inactive status” while an investigation is ongoing.

“The Massachusetts National Guard has a proven track record of fair and equitable service and takes pride in our diversity and inclusionary practices to support our residents in every community, and has no tolerance for this insensitive behavior,” the statement reads. “The Massachusetts National Guard has taken immediate action to address a Soldier’s inflammatory and divisive comments, and he has been placed on inactive status and will not serve in any capacity while this matter is under investigation.”

A man with the same name as that of the accused was also discovered as being a member of the collaborative pastoral council for a Catholic church in Boston.

The Daily Dot reached out to the church’s reverend to inquire whether the person named was also the man accused of making threats but did not receive a reply by press time.

The Daily Dot will update the story when and if the individual’s identity is confirmed.