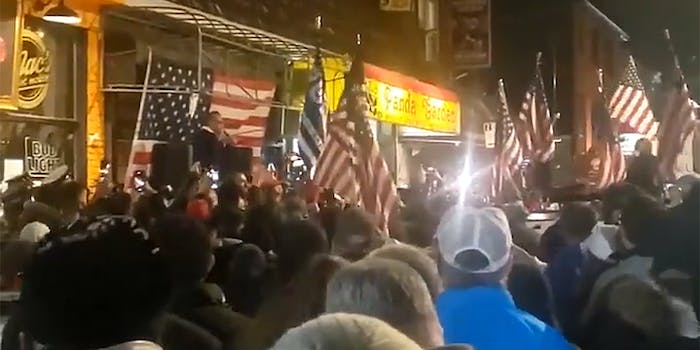 The bar had declared itself an 'autonomous' zone.

Hundreds of anti-lockdown demonstrators gathered outside a New York bar Wednesday night to protest its closure and the arrest of its owner for violating local coronavirus restrictions, the Washington Post reports.

The bar in question was Mac’s Public House in Staten Island. Police busted the establishment on Tuesday for “operating without a liquor license, for serving food and alcohol to patrons indoors past the 10pm EST citywide curfew in exchange for a mandatory $40 ‘donation,’” per the Washington Post. The bar’s co-owner, Danny Presti, was arrested Tuesday for obstructing governmental administration and released Wednesday.

Mac’s had been egging on local authorities for weeks. The bar announced on Nov. 20 that it would continue to host indoor dining, ignoring a cease-and-desist order and a growing mountain of fines. Presti painted an orange rectangle in front of the bar and mockingly declared it an “autonomous zone.” Its liquor license was revoked a week later.

Numerous videos uploaded to social media show the hundreds of largely maskless protesters—including members of far-right neo-fascist group the Proud Boys, according to the New York Post—railing against New York Gov. Andrew Cuomo (D) and local police. Standing shoulder-to-shoulder and waving a slew of American flags, the protesters can be heard shouting “U.S.A.!” and “Cuomo sucks!”

Other protesters led the crowd in the Proud Boys oath of “I’m a proud Western chauvinist,” the New York Post reports. Another shouted at police, “Where is your backbone? Where is your morality?”

Staten Island is a heavily pro-Trump borough, and New York’s Police Benevolent Association union endorsed the outgoing president earlier this year. One might reasonably expect the Staten Island protesters to be largely pro-police—but their allegiances shifted when police prohibited them from guzzling Long Island Iced Teas and Bud Lights inside the local watering hole.

Many Twitter mocked the protesters for their hypocrisy and noted that the cops seemingly did little to stop them—a stark contrast with violent tactics used at so many Black Lives Matter rallies this year.

“Huh, I don’t see any cops mowing down protesters here… probably a coincidence that they’re all white people in Staten Island, though,” reporter and editor Jordan Zakarin tweeted.

“When NYPD cops killed #EricGarner in Staten Island for allegedly selling loosies, these fascists cheered it & supported the cops,” @AshAgony tweeted. “But when cops shut down a bar in an area with high COVID rates, all of a sudden, they’re screaming about ‘freedom’ & the rights of small businessmen.”

Other Twitter users predicted the huge, mask-free protest would result in more COVID-19 infections in a city that is already overwhelmed by deaths and hospitalizations.