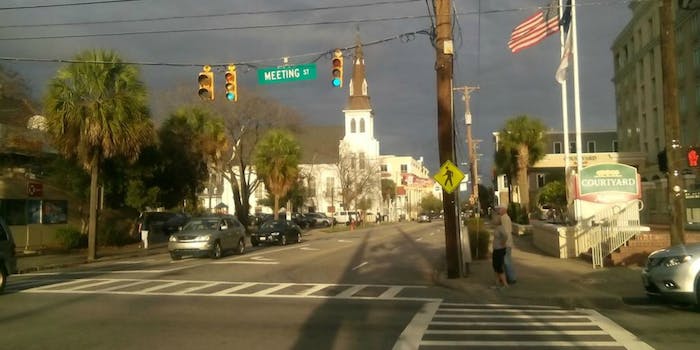 It was not the most tactful request.

The country, once again, was thrown into disorder this past summer when a 21-year-old white supremacist named Dylann Roof allegedly opened fire at the famed Mother Emanuel AME church in Charleston, South Carolina.

As the country continues to heal from the massacre that killed nine churchgoers who were participating in a Bible study, one hotel would prefer it if you didn’t include its building (and, presumably, its sign) in any photos you might take of the church.

Quintin Washington, a Charleston interviewer, was out on a warm winter afternoon on Sunday when he decided to snap a photo of the church and its surrounding area.

Soon after, the nearby Marriott Courtyard made its request.

So this was just tweeted to me, although they are a part of the Mother Emanuel Way Memorial District. #chsnews #chs pic.twitter.com/gTtV8njfSw

The hotel deleted the tweet to Washington, but then, seemingly adding to its own problems, blocked Washington from viewing its account.

Kevin Singleton—whose mother, Myra Thompson, was killed in the attack—told the newspaper: “Sometimes corporate responsibilities are more about the bottom line—image, profits—than the moral fiber that’s needed in a community that’s still healing.”