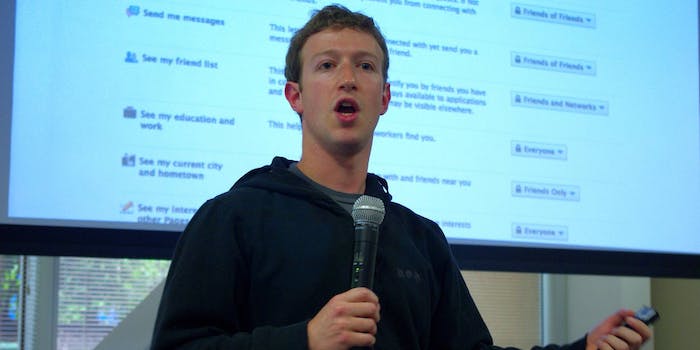 While one high-profile billionaire is stirring up fear and hatred for Muslims, another is offering support. Facebook founder Mark Zuckerberg took to the social network and offered a defense of the Muslim community around the world Wednesday evening.

In a post, Zuckerberg stated, “If you’re a Muslim in this community, as the leader of Facebook I want you to know that you are always welcome here and that we will fight to protect your rights and create a peaceful and safe environment for you.”

Trump’s policy suggestion has been roundly denounced, including by members of his own party, communities across the United States, and by large swaths of people around the world—though it has been a hit with neo-Nazi groups.

Trump had previously suggested that all Muslims in the U.S. would be required to register in a database in order to track their activity. Other presidential candidates have offered similar measures: Ted Cruz has pledged to introduce a bill that would implement a religious test on Syrian refugees entering the U.S., prohibiting Muslims while accepting Christians; Rand Paul introduced his own bill to halt refugees from Syria and subject French citizens to a waiting period; and Ben Carson suggested a Muslim citizen shouldn’t be president because Islam is “inconsistent with the values and principles of America.”

Following the terrorist attack in Paris and the terror-linked mass shooting in San Bernardino, California—the deadliest in America since Sandy Hook—tensions have been considerably heightened. Zuckerberg attempted to ensure his social network would be a safe haven for all people, including Muslims.

“As a Jew, my parents taught me that we must stand up against attacks on all communities. Even if an attack isn’t against you today, in time attacks on freedom for anyone will hurt everyone,” he wrote.

Part of the statement is pragmatic. Facebook is the largest social network in the world, registering more than 1 billion monthly active users, including countries that have a majority Muslim population. The head of the site isn’t going to turn his back on 23 percent of the global population as he tries to get them on his platform.

But Zuckerberg has embraced a more activist role recently, pledging to give 99 percent of his shares of Facebook—worth about $45 billion— away through the newly formed Chan Zuckerberg Initiative.

In launching the organization that will be in charge of distributing his wealth, Zuckerberg also penned a letter to his daughter that promoted equality and vowed to make the world a better place for her.

Zuckerberg again evoked his daughter in his post on Wednesday, stating, “Having a child has given us so much hope, but the hate of some can make it easy to succumb to cynicism. We must not lose hope. As long as we stand together and see the good in each other, we can build a better world for all people.”

Photo via Jakob Steinschaden/Flickr (CC BY 2.0)