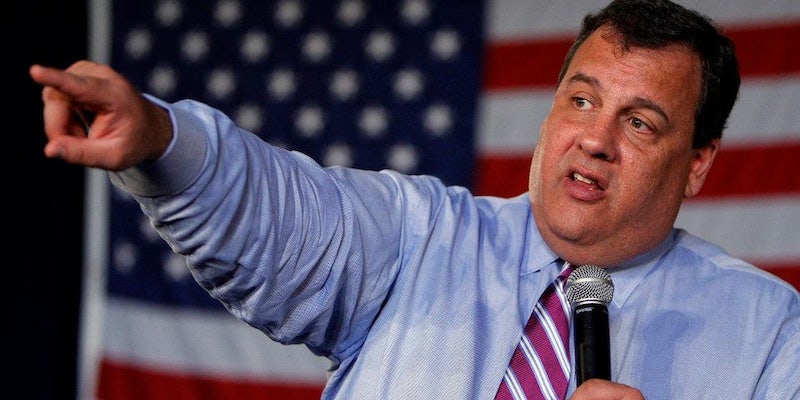 The Facebook tycoon is hosting a fundraiser for the Republican in his home.

Facebook founder Mark Zuckerberg made his first big step into politics on Thursday when BuzzFeed reported that the young executive would be putting on a fundraiser for Republican Gov. Chris Christie. Representatives from both Facebook and the New Jersey’s governor’s office confirmed the event on Thursday.

The fundraiser will be held sometime in February and marks the first time Zuckerberg has publicly endorsed a candidate, although he has worked with both Republicans and Democrats in the past. Zuckerberg first worked with Christie in 2010 when the social media tycoon donated $100 million to Newark’s public schools.

“Mark and [his wife] Priscilla have worked closely with Governor Christie on education reform in the Newark school system,” Facebook spokeswoman Sarah Feinberg told BuzzFeed. “They admire his leadership on education reform and other issues and look forward to continuing their important work together on behalf of Newark’s schoolchildren. Mark and Priscilla are happy to host him at their home to support his reelection.”

It didn’t take long for Democrats to call out Zuckerberg and his high-profile endorsement. Just hours after BuzzFeed reported the story, the Democratic Governors Association launched a petition to try and get Zuckerberg to cancel the event.

Facebook got involved with political donations in 2011 when the company formed a political action committee. From January to September 2012, the company donated $140,000 to Republican candidates in Congress and $127,000 to Democratic candidates. (Although, as pointed out by CNN, there are more GOP members of the House than Democrats.) Zuckerberg has also had run-ins with the President. In 2011, he hosted a Facebook town hall with Barack Obama, an event important enough for him to even lose his signature hoodie.

The news of Zuckerberg holding a fundraiser for a prominent Republican was as notable for the social media CEO as it was for Christie. Often thought of as a possible 2016 presidential contender, Christie has made a name for himself as an outspoken chief executive who has seen skyrocketing popularity for his handling of Hurricane Sandy. However, many in his own party are frustrated with his repeated attacks on fellow Republicans and his support of Obama during the aftermath of the storm.