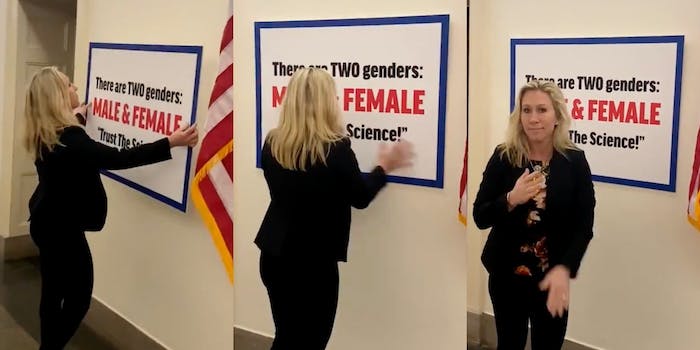 She hung the sign after spending all day trying to kill the Equality Act.

Rep. Marjorie Taylor Greene (R-Ga.) caught bipartisan heat from Congress yesterday after she hung a transphobic sign outside her office, which sits directly across from the office of Rep. Marie Newman (D-Ill.), who has a transgender daughter.

Greene hung the sign after spending the day embroiled in a heated floor debate over the Equality Act, which would ban discrimination based on sexual orientation and gender identity. The QAnon-sympathizing, conspiracy theory-touting congresswoman also put up her transphobic sign in response to Newman, who hung a transgender pride flag outside her office earlier that day.

“Our neighbor, @RepMTG, tried to block the Equality Act because she believes prohibiting discrimination against trans Americans is ‘disgusting, immoral, and evil,’” Newman wrote on Twitter with a video of her putting up the flag outside her door. “Thought we’d put up our Transgender flag so she can look at it every time she opens her door.”

Because every action has an equal and opposite reaction, Greene posted her own retaliatory video a few hours later.

“Our neighbor, @RepMarieNewman, wants to pass the so-called ‘Equality’ Act to destroy women’s rights and religious freedoms. Thought we’d put up ours so she can look at it every time she opens her door,” Greene tweeted with a video of her hanging a sign that reads, “There are TWO genders: MALE AND FEMALE. ‘Trust The Science!’”

That same day, Greene argued on Twitter that the Equality Act would destroy “women’s rights,” “women’s sports,” and “religious freedom.” She also refused to acknowledge Newman’s daughter, Evie, as a woman when she tweeted, “Your biological son does NOT belong in my daughters’ bathrooms, locker rooms, and sports teams.”

In reality, Greene has a fickle relationship with both science and religious freedom advocacy. She regularly avoids wearing masks in confined, public spaces despite the risk posed by the ongoing coronavirus pandemic, and in February 2019, she tried to force Muslim Reps. Ilhan Omar (D-Minn.) and Rashida Tlaib (D-Mich.) to retake their congressional oaths on the Bible instead of the Quran.

“This is sad and I’m sorry this happened,” Rep. Adam Kinzinger (R-Ill.) tweeted. “Rep. Newmans daughter is transgender, and this video and tweet represents the hate and fame driven politics of self-promotion at all evil costs. This garbage must end, in order to #RestoreOurGOP.”

Greene also broke the cardinal rule of the internet by holding an easily editable sign, inviting an onslaught of memes.

In a CNN interview this morning, Newman explained the impetus for hanging the transgender flag outside her office and responded to Greene’s transphobic retaliation.

“I just wanted to make a statement so that [Greene] sees LGBTQ+ people,” Newman said. “And so the symbolism was simply to put the flag out there so she has to see our community every day. I’m immensely proud of my daughter, and that’s all anyone is asking for, is to be treated as anyone else.”

Meanwhile, Facebook has reportedly labeled a video of Newman hanging her flag as “hate speech.”