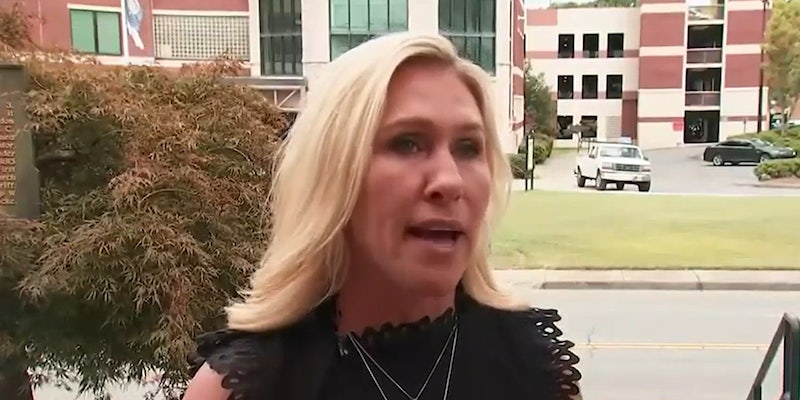 Is Marjorie Taylor Greene being swatted by trans activists or trolls trying to frame them?

Greene was swatted a second time today according to police.

Rep. Marjorie Taylor Greene (R-Ga.) was swatted for a second time on Thursday at her home in Rome, Georgia.

Greene, according to a police report obtained by the Daily Dot, was met by law enforcement at around 3am after a 911 call regarding a potential murder-suicide at her residence.

The incident began after a suicide crisis center received an internet chat from an unknown individual alleging that they had shot their family after coming out as transgender.

The individual, who identified themselves as Wayne Greene, further claimed that they would shoot themselves and anyone who came to the home to intervene.

The suicide crisis center, which alerted emergency services to the alleged incident, noted that it was unable to trace the location of the individual due to their use of a VPN. Police made contact with Greene at her home shortly after and confirmed that nothing had actually taken place.

The swatting attack, which happens when a prank call is made to emergency services in an effort to cause an aggressive police response against a target, is similar to the one that took place against Greene the evening prior.

On Wednesday, a call made to a veterans crisis line alleged that a man in a bathtub at Greene’s home had been shot five times in the chest. The caller, which reportedly used a robotic text-to-speech voice to make the claim, also alleged that they had been upset with Greene’s stance on “transgender youth rights.” Greene just this month introduced a bill to make gender-affirming care for transgender youth a felony.

Yet there is no evidence that any of the alleged motives from either swatting incident are true. In the first swatting attack, the caller also claimed to be an anti-transgender administrator on a notorious internet forum known for doxing and swatting.

The forum, known as Kiwi Farms, is currently involved in a targeted harassment campaign against Twitch streamer and transgender rights activist Clara Sorrenti. Known online as Keffals, Sorrenti was recently forced to flee her home after being swatted as well. Sorrenti was also temporarily arrested after an unknown individual impersonating her reportedly sent a mass shooting threat to lawmakers. While hiding out in a hotel, Sorrenti was reportedly doxed yet again by Kiwi Farms users who were able to find her location after seeing a photograph of the bed sheets in her room.

Although there is no strong evidence at this time linking the swatting against Greene to the campaign against Sorrenti, the fact that the first caller mentioned Kiwi Farms and both callers mentioned transgender-related issues while targeting the lawmaker suggests that a connection could very well exist.

In the wake of the first swatting attack, Greene called for Kiwi Farms to be taken offline. Supporters of Kiwi Farms believe that those who carried out the swatting attacks clearly did so with the intention of taking down the forum. Sorrenti and her fans had already been calling on the hosting company Cloudflare to drop Kiwi Farms as a customer prior to Greene being targeted.

Kiwi Farms has been down for several days. Cloudflare did not respond to a Daily Dot request for comment.

In a post on Telegram, Kiwi Farms argued that the swatting attacks were clearly aimed at damaging their site.

“There is a person—or group of people—committing serious felonies almost every day using sophisticated masks in an effort to draw fire on us. I can’t stop it, the Government can’t stop it, and the victims don’t care about the truth,” it wrote. “The Twitter mob will take any problem and opportunistically use it against us. Congresswoman Greene did not take one second to think about threats attributed to the forum before accepting them as true and demanding we be shut down by force of law on television.”

But many of those backing Sorrenti argue that the first caller’s claim of being upset about Greene’s stance on transgender youth, as well as the second caller’s claims of being transgender, indicated that the attack was aimed at harming them.

Greene, on the other hand, has already framed the swatting attacks against her as being carried out by those on the left who support transgender rights. In reality, not enough information has been gathered so far to determine what the true motives behind the attacks actually are. It could very well be that the swatting incidents were carried out by individuals only interested in further enflaming the division between Kiwi Farms and Sorrenti.

The two swatting incidents against Greene are currently under investigation by Capitol Police and local law enforcement in Georgia.