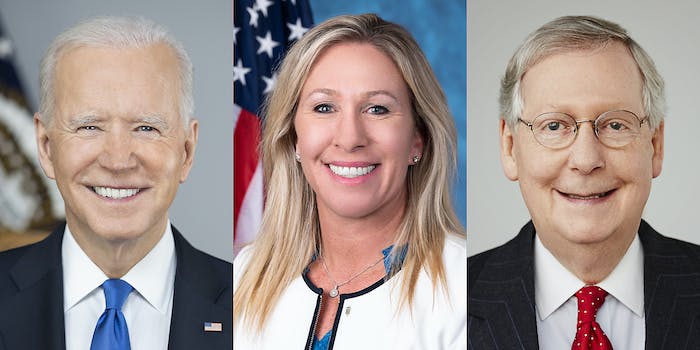 McConnell drew the ire of Greene after siding with Democrats on raising the debt ceiling.

In a scathing tweet on Tuesday, Greene attacked her fellow Republican by accusing him being President Joe Biden’s “bitch” for allowing the vote to go through.

“The House of Representatives is voting after midnight tonight because @LeaderMcConnell allowed Democrats to bi-pass the filibuster and ram through the debt ceiling increase to $31.5 TRILLION,” she wrote. “Mitch is Biden’s bitch.”

The bill, aimed at keeping the government from defaulting on its debt, passed the Senate that evening in a 50-49 vote along party lines.

Greene, who is no stranger to controversy given her proclivity for conspiracy theories, drew a wide-range of reactions for her remark.

Supporters of the lawmaker applauded her statement, likewise agreeing with the assessment regarding McConnell.

“He needs to go,” @melissamiller33 wrote.

Others opposed to McConnell were more insidious, arguing that the lawmaker should be “dealt” with.

“Mitch is a traitor and must be dealt as such,” @patrol_dude wrote.

Some instead argued that the entire display was inappropriate and unbecoming of a legislator.

“Wow, she’s supposed to be member of Congress? Hey I don’t like @LeaderMcConnell much, but as a country we expect amodicum [sic] of decency from a member of Congress,” @GinoKusa said. “She has degraded the founding Fathers with ‘Mitch is Biden’s Bitch.’ It’s not Real Housewives of the Capitol.”

Greene’s tweet has received nearly 6,000 shares and more than 17,000 likes. McConnell has not responded to Greene’s comments on Twitter as of Wednesday afternoon.