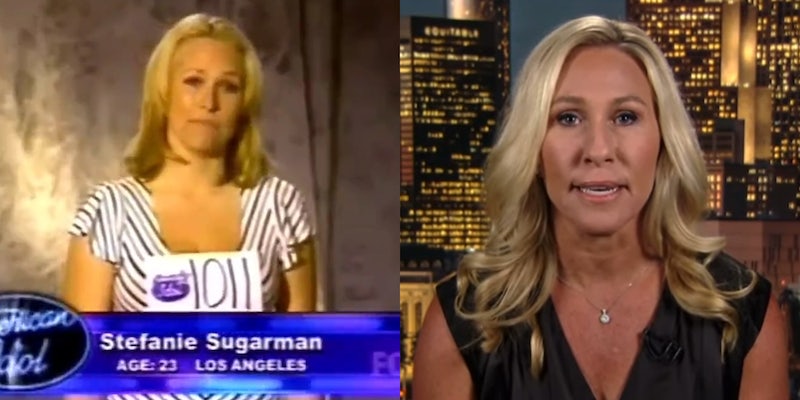 A viral tweet claims the politician was rejected by Simon Cowell in 2002.

Posted by the Twitter user “Far Left Kyle,” the video, which comes from the first season of the hit TV show, has already been viewed more than 1.4 million times.

“Marjorie Taylor Greene’s try out for the first season of American Idol under a stage name lmao,” he wrote. “What a loser.”

The haphazard audition is ultimately rejected much to the dismay of the young performer.

The tweet was quickly shared more than 10,000 times, mainly by left-wing users who mocked Greene for the alleged appearance.

Kamie Crawford, co-host of MTV’s reality show “Catfish,” was one of numerous users to spread the claim.

“So what you’re telling me is that she’s always wanted a platform – no matter how much of a clown she has to demonstrate herself to be in order to get it,” she wrote. “No attention is bad attention. You’ll never catch me boosting her views again after this. Fuck her.”

But the woman in the footage is not Greene. In a statement to the New York Post, representatives for the politician referred to the claim as nothing more than “Blue Anon” nonsense.

“It’s so blatantly obvious that this is another Blue Anon conspiracy theory,” they said.

Research by TMZ also found that a woman named Stefanie Sugarman does exist in California with the same birthday as the American Idol performer. Sugarman told producers on the show that she was born in 1979, while Greener was born in 1974.

While the pair do look somewhat alike, evidence indicates that the viral claim is untrue. The Twitter user who shared the footage, Far Left Kyle, later admitted that he had found the footage on Reddit.

“So the video I posted thinking at first it was MTG, which I found on reddit saying the exact same thing, turned out to not be her and we all found that out very quickly,” he wrote. “You guys can stop clutching your pearls over dishonoring your favorite christofascist.”

Despite criticism from many other liberals that the tweet was misinformation and therefore harmful, Far Left Kyle has continued to defend his promotion of the false claim.