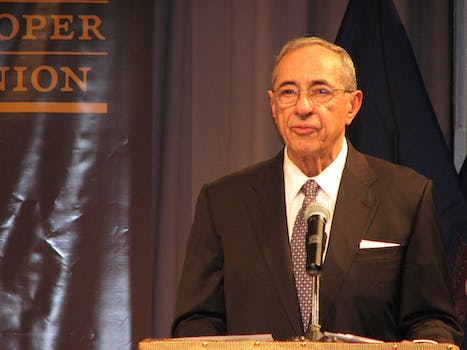 Thirty years later, the speech that made him famous rings true.

Former New York Gov. Mario Cuomo died on New Years Day at the age of 82. Just six hours before, his son Andrew, the current governor of New York, was sworn in to a second term.

While he served as the Democratic governor of the Empire State from 1983 to 1994, Cuomo is perhaps remembered best for a keynote speech delivered at the Democratic National Convention on July 6, 1984. The eloquent address, a powerful denunciation of the Republican Party’s economic policies, was not enough to halt the landslide re-election of President Ronald Reagan, but it secured his future in the Democratic Party and made Cuomo a household name.

“President Reagan admitted that although some people in this country seemed to be doing well nowadays, others were unhappy, and even worried, about themselves, their families, and their futures,” Cuomo’s voice resounded at the Moscone Center in San Francisco. “The president said he didn’t understand that fear. He said, ‘Why, this country is a shining city on a hill.’”

“A shining city is perhaps all the president sees from the portico of the White House and the verandah of his ranch, where everyone seems to be doing well. But there’s another part of the city, the part where some people can’t pay their mortgages and most young people can’t afford one, where students can’t afford the education they need, and middle-class parents watch the dreams they hold for their children evaporate. In this part of the city, there are more poor than ever, more families in trouble. More and more people who need help but can’t find it. There are ghettos where thousands of young people, without an education or a job, give their lives away to drug dealers every day. There is despair, Mr. President, in faces you never see, in the places you never visit in your shining city.”

“He used to call me at home to recite his drafts to me over the phone,” Cuomo speechwriter Stephen Schlesinger recalled following the former governor’s death on Thursday. “It was a fascinating experience and a somewhat peculiar compliment to me to see how rigorously he labored with the raw communicative materials of his livelihood.

“He encouraged criticism of his work and did not get annoyed if you disagreed with him. Sometimes, though, when he wanted to end the conversation, he simply hung up the phone.”

Saddened by the passing of Mario Cuomo – a passionate public servant and the embodiment of the American dream. http://t.co/YP6Liuuj2N

Partisan politics aside, Cuomo’s ’84 address is still relevant more than 30 years later. His impassioned commentary on issues such as the vicious homelessness in cities like Chicago, the prospect of a dwindling Social Security system, and equality for women in the workplace all remain crucial matters for America today.

Photo by David Berkowitz/Flickr (CC BY 2.0)