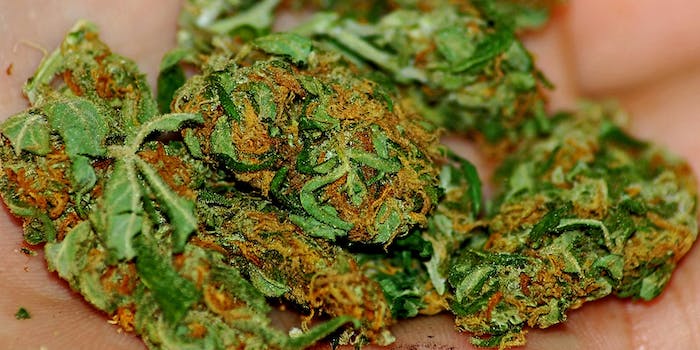 What libertarian fever dream is this?

With Colorado fast becoming the libertarian utopia that neckbearded redditors have long dreamed of, this was all but inevitable. A new line of marijuana vending machines that consumers can access directly—the first such devices in the U.S.—will accept Bitcoin.

Manufactured by American Green, the ZaZZZ machine was unveiled in a private event on Saturday and could make its official debut at the Herbal Elements dispensary in Avon just before 4/20, a cult holiday on which habitual pot-smokers smoke slightly more pot than usual.

#zazzz we will be starting a new web series talking about all the products that will go in the machine! pic.twitter.com/YgyJiE1jy3

As CoinDesk has pointed out, Bitcoin and weed were initially linked in Colorado because banks were wary of partnering with businesses that adhered to state regulations but skirted federal law. Unable to accept credit cards, dispensaries could only take cash or, in some cases, cryptocurrency. Small wonder, then, that the ZaZZZ is equipped with QR code technology that allows payment from digital wallets.

Herbal Elements only deals in doctor-prescribed weed, however, so recreational smokers will have to wait a while to skip the line and swipe their IDs, which are verified against “active biometrics,” in order to purchase some sticky bud. Shearin, however, sees a wide range of possibilities for ZaZZZ, including the integration of medical cards. Overall, he sees the machines as an opportunity to increase efficiency, automatically monitor sales, streamline the flow of marijuana from farm to store, and allow “shy” customers a more discreet shopping experience.

“[T]hink of automated checkouts at the market,” he told the Cannibist. “Not for everyone, but for those who use it, they love it.”