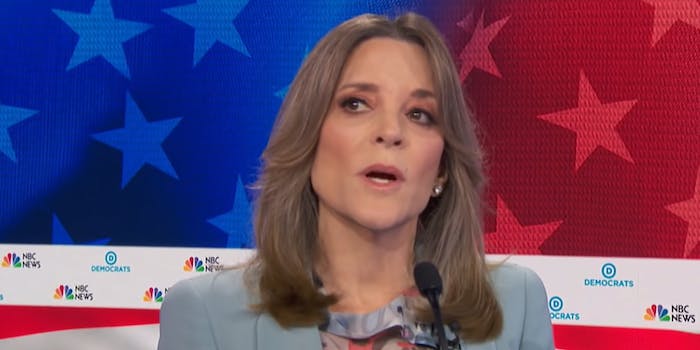 Williamson will be on stage on the first night of the second Democratic debate tomorrow.

2020 presidential hopeful Marianne Williamson gained a lot of attention for her performance during the first Democratic debate last month—with a number of people joking about some of her answers.

However, as she prepares to be on stage tomorrow during the first of two nights of the second Democratic presidential debates, Williamson told USA Today she is trying to gain attention without all of the memes.

“I hope that this time my delivery will be more aligned with my substance,” the 2020 hopeful and spiritual guru told the newspaper. “I don’t regret the substance of anything I said, but I understand that my delivery made me vulnerable to mockery.”

During the first debate in June, Williamson’s insistence that she would call New Zealand’s prime minister as her first act as president to tell her that the “United States of America is going to be the best place in the world for a child to grow up” left many people confused.

Williamson told USA Today she’s learned from the first debate and plans to “just be myself” during this go-around.

During tomorrow’s first round of debates, Williamson will be on stage with a number of 2020 Democratic frontrunners including Sen. Elizabeth Warren (D-Mass.), Mayor Pete Buttigieg, and Sen. Bernie Sanders (I-Vt.)