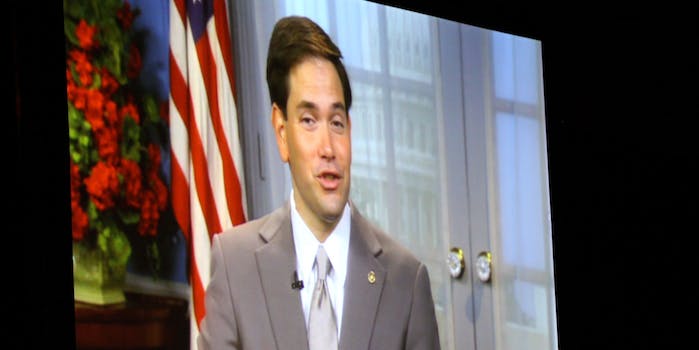 This is obviously NSFW—in more ways than one.

Former Republican presidential candidate Marco Rubio might get some strange looks the next time he visits Alabama.

Thanks to a security exploit revealed on Friday by notorious hacker-troll Andrew “weev” Auernheimer, a hacker who goes by the name Johnny Cockring on Twitter managed to display Photoshopped pornographic images of the Florida senator on two LED billboards in Alabama, Motherboard reports.

“Weev was the one who posted the security flaw,” Cockring told Motherboard. “I just did the next logical step to proof of concept.”

The images of Rubio were not the only photos to appear on the billboards, according to Cockring, who said that around 20 images were included in the “playlist” he or she connected to the billboard.

Auernheimer told Motherboard that he had no intention of anyone taking advantage of his disclosure that Internet-connected billboards are often insecure and can be accessed using certain default login credentials.

In subsequent tweets, Auernheimer said, likely sarcastically, that his efforts to “responsibly disclose security issues” with Internet-connected billboards was not going as planned.

While Johnny Cockring’s true identity remains unknown, Auernheimer is notorious in certain circles for his various online escapades. He first gained national attention in 2010 after he exploited a flaw in AT&T’s website that allowed him to access the identities and personal information of the company’s iPad users through a public-facing website. Operating under the name Goatse Security, Auernheimer told AT&T of the security flaw but also handed over the identities of the AT&T customers to Gawker.

Auernheimer was convicted under the Computer Fraud and Abuse Act (CFAA) in 2012 and later sentenced to 41 months in prison before his conviction was overturned and his charges vacated due to the improper location of his trial.

More recently, Auernheimer has become known for his anti-semitic rants, and he made headlines in March after he hacked the printers of more than a dozen universities and printed white supremacist messages.