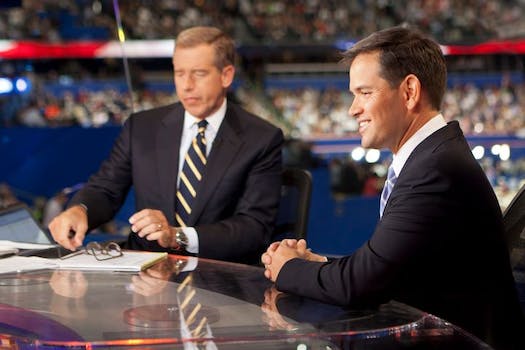 From the same GQ article: "I'm not a scientist."

Days after Marco Rubio made an appearance in Iowa, the junior senator from Florida is surrounded in controversy: Does he or does he not like the rapper Pitbull?

Rubio took to Twitter on Monday to clear up his stance on the Cuban-American rapper from Miami. The possible 2016 presidential hopeful, who is known to like rap music, recently told GQ that he wasn’t a fan of Pitbull’s work, dismissing it as “party music.”

“Story about me not liking @Pitbull music flat wrong.Have much respect 4 & proud he comes from #305.Read chapter 1 of my book #AnAmericanSon,” the senator wrote.

In the same story, Rubio was asked how old the Earth was and responded by saying “I’m not a scientist.” That comment created more of an uproar on Monday, but Rubio had yet to shoot down those comments on Twitter.

“’That story about me not liking @pitbull is flat wrong. That one about me not believing science? Pretty accurate.’ [email protected],” wrote @Dante3000.

The tweet about Pitbull—who, as of late Monday night had yet to respond to Rubio—did spur a new hashtag: #RubioRapNames, which was created by @PoliticsRadio. Some of the best suggestions included Run-GOP, N.W.A. (Neoconservative Wit Attitude), TeaPac and the Notorious G.O.P.

The GQ interview that was released this week helped Rubio find a surge of mentions on Twitter: According to social analytics tool Topsy, there had been nearly 30,000 on Monday. Of course, many of the mentions were critical of the young senator. However, in the long run, the activity surrounding Rubio could only help him gain name recognition.

The young legislator took office in January 2011 and has grown in popularity among the GOP faithful since. His trip to Iowa this week, just two weeks after Mitt Romney lost in his bid for the presidency, has many in his party hopeful Rubio will go for the White House in 2016. It would be a sure bet for Republicans, who are looking for a fresh and more diverse face, as well as someone who could easily win the battleground state of Florida.

Update: This story has been amended to credit @PoliticsRadio with the creation of the #RubioRapNames Twitter hashtag.