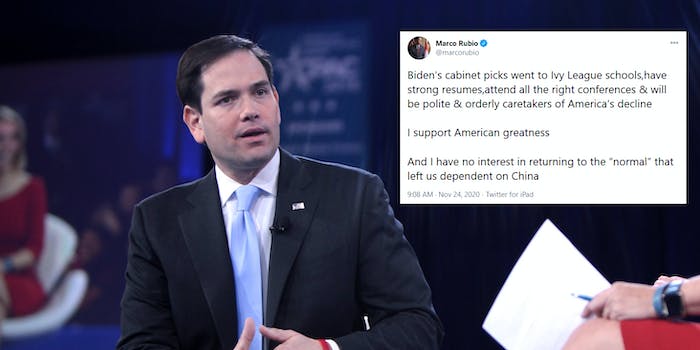 A lot of people noted that Trump's cabinet is also filled with people who went to Ivy League schools.

While on the surface this is an odd hill to die on, Rubio—who has a long history of tweets getting dunked on—was quickly reminded that President Donald Trump also picked a number of people to serve in his administration that attended colleges like Harvard, Yale, and others.

“Biden’s cabinet picks went to Ivy League schools, have strong resumes, attend all the right conferences & will be polite & orderly caretakers of America’s decline,” Rubio tweeted on Tuesday. “I support American greatness And I have no interest in returning to the ‘normal’ that left us dependent on China.”

Zooming out, this may be Rubio signaling that he will resist confirming Biden’s picks for his cabinet, an issue that the incoming president-elect may face if the Senate remains in Republican control. The outcome of the Senate runoff elections in Georgia will determine the makeup of the upper chamber and thus who controls it.

Regardless, the tweet from the Florida senator joined a laundry list of his past thoughts that were ratioed.

Some people pointed out the schools people in Trump’s cabinet went to (also Ivy Leagues), while others were baffled that Rubio, who voted to confirm many of Trump’s unqualified picks for cabinet, like Rex Tillerson and Betsy Devos, was bothered by qualifications.

As pointed out by many, Trump himself also went to an Ivy League school.