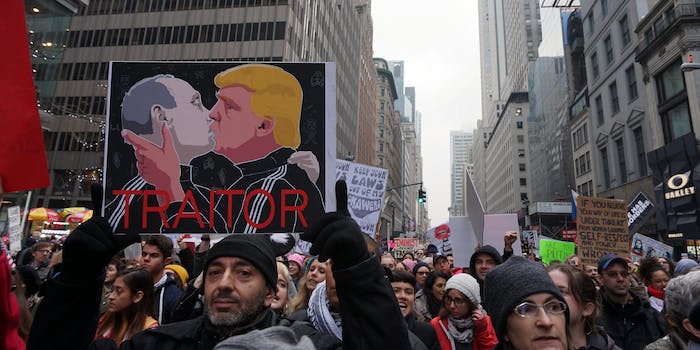 March for Truth: Americans in over 100 cities demand answers on Trump and Russia

More than 135 cities across the U.S. are taking part.

It’s Saturday in America in 2017—and for thousands of people, that means taking to the streets to air grievances about the administration in the White House.

Today, over 135 cities across the United States will play host to March for Truth demonstrations. The marches directly address the largest, smokiest scandal facing America today: The ties between Russia and President Donald Trump‘s campaign and associates.

According to the organizers of the March for Truth, which includes more than 17 national progressive organizations, the time for answers is long overdue.

“Every day we learn more about the role Russian state-led hacking and information warfare played in the 2016 election, and there are crucial unanswered questions about the relationship between the Russian state and Donald Trump, his associates and his campaign,” the organizers write on the March for Truth website. “The legitimacy of the United States government hinges on the answers to these questions. If the President was elected even in part due to collusion with a foreign effort to interfere in our democratic process, then the will of the people has been subverted.”

The March for Truth is pushing for a series of demands, including an independent counsel to investigate the campaign’s ties to Russia, the release of Trump’s tax returns, the publishing of as much relevant information as possible, “as soon as possible,” and the prosecution of any crimes that may be uncovered.

If you agree with this sentiment and want to take part, the March for Truth organizers make it easy to find a march near you. Simply type your zip code into the website’s location tool, which will pull up scheduled marches close to you, as well as the related Facebook groups and other information. While some marches begin in the morning, others don’t kick off until late in the afternoon or early evening, so check sooner rather than later so you don’t miss out.

Marching not your thing? You can donate to the effort here, or simply join in on the conversation, which will be coalescing around the #MarchForTruth hashtag.