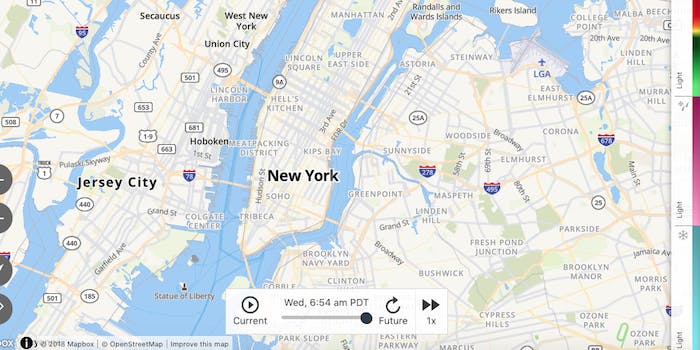 Hacked maps appeared in Snap Maps, on the New York Times, and on The Weather Channel.

Mapbox, the company that sources maps for Snapchat’s Snap Map, the New York Times, and other businesses, appears to be the victim of anti-Semitic vandalism. Those who looked at maps on Snapchat, the Weather Channel, or Vox may have noticed the crude hack, which relabels New York City as “Jewtropolis.”

“Snap Map relies on third party mapping data which has unfortunately been subject to vandalism,” Snap told the Verge in a statement. “We are working with our partner Mapbox to get this fixed immediately.”

.@Mapbox, the third party that provides map functionality to @SnapMap, @nytimes, @CitiBikeNYC, and many others, was the subject of vandalism as New York City now displayed as "Jewtropolis". pic.twitter.com/nq7sFltg1P

People began spotting the anti-Semitic vandalism around 4am CT, and the issue seems to have been fixed by 9am CT. Mapbox hasn’t made any public comment about the vandalism on its Twitter account or website, but gave TechCrunch a comment once the snafu was corrected.

“This is now 100 percent fixed and should have never happened. It’s disgusting,” Mapbox CEO Eric Gundersen said. Gunderson explained that Mapbox uses a large system that incorporates a mix of AI and human employees to spot map vandalism, and said it was an error on their part to have missed this instance.

Map vandalism is not uncommon. In 2016, someone renamed Trump Tower “Dump Tower” on Google Maps, for example. More recently, someone renamed the Russell Senate Building after John McCain—a name change the Senate is considering but has not been approved yet. Other mapping organizations, such as Open Street Map, have also experienced vandalism over the years.

Sometimes such vandalism is purely a joke, or in the case of the McCain Senate Building, wishful thinking. This anti-Semitic instance is far more troubling. The Anti-Defamation League found anti-Semitism surged 57 percent in 2017. President Donald Trump has been accused of making anti-Semitic statements numerous times over the years, including sharing an anti-Semitic meme, and in defending neo-Nazi protestors during the violent Charlottesville riots that ended with three deaths.