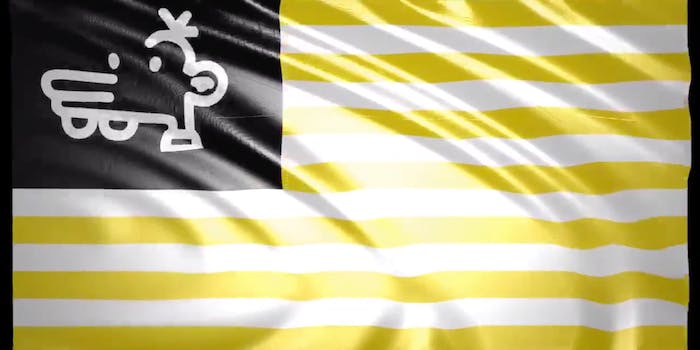 'The Manny will not be televised.'

Over the weekend, a petition started by prominent TikTok creator Wahony to change the national anthem and alter the American flag to “The Manny” flag gained over one million signatures.

The proposed changes would replace the national anthem with rapper Wiz Khalifa’s 2010 hit “Black and Yellow.”

Alterations to the American flag would include yellow stripes in lieu of red and replacing the upper-left rectangle with a drawing of Manny Heffley from the Diary of a Wimpy Kid book series.

Will Wahony, who currently has over 1.3 million followers on the platform, posted a TikTok on Friday directing viewers to a petition that in three short days has amassed over one million signatures.

“Our goal is to convince Fox News to make a story on how Gen Z is trying to change the American flag,” says Wahony. “Obviously the American flag isn’t going to get changed, but it’s so f*cking funny.” Wahony cites the reports of TikTok users reserving tickets for Donald Trump’s Tulsa, Oklahoma rally on June 20 to throw off the attendance estimates as his inspiration.

But how did Manny Heffley, a character from a young adult comedy book, become a symbol for Gen Z and the Black Lives Matter movement?

“The Manny” graffiti can actually be traced back to the widespread demonstrations against police brutality happening across the country. A TikTok by user @jacob.jarvis_ was posted on May 9 and quickly went viral. In the TikTok, Jarvis asks “Okay, who thinks it’s funny to spray paint the Manny up there, huh?” while holding a can of spray paint.

Another TikTok posted on June 8 from user @themannyspotted shows a group of people repeating the phrase, “The Manny will not be televised” (a play on the Gil Scott-Heron poem title) while somebody draws the character on a sidewalk with chalk.

The audio from this TikTok was then frequently used to accompany other users spotting or creating their own “The Manny” artwork. Many were repurposed with Black Lives Matter slogans.

The graffiti has also carried anti-police messages like “All cops are bastards” and “Fuck 12.”

The author of the Diary of a Wimpy Kid series and creator of “The Manny,” Jeff Kinney, had a less than ringing endorsement of the symbology. In a now deleted tweet, Kinney says “Lots of people are asking me right now how I feel about my character being used as an anti-police symbol. Honestly, I don’t like it.”

Kinney further clarified that while he supports the Black Lives Matter movement, he views using his character as a symbol in the movement as detrimental to the overall cause. “I think that assigning a cartoon character to this trivializes it,” said Kinney to inquiring fans. “Here’s hoping this generation gets the leadership it deserves.”

Since reaching a million signatures, the movement has also received some criticism for possibly trivializing the movement and detracting from actually important matters. Wahony has candidly and openly replied to these concerns.

“Of course the video I make about moving forward and making actual change doesn’t get a tenth of the views the Manny flag petition did,” says Wahony in a recent TikTok. “Please go sign some real petitions in my bio.”

After “The Manny” flag petition’s initial viral moment, Wahony set up a website to act as a resource for further steps to be taken beyond the joke gesture.

“This website is to be used as a hub for change. We will update this page as often as possible with petitions, donation links, and other methods of making change.”

Currently linked petitions include ones calling for justice for Oluwatoyin “Toyin” Salau and Elijah McClain as well as a call for an executive order to eliminate student debt.