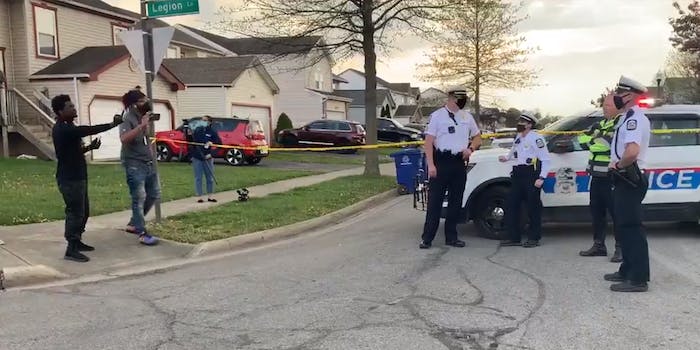 Cops were responding to a 911 call, reportedly from Bryant herself, and when they arrived on the scene they found Bryant holding a knife while fighting two other teenage girls. Bodycam footage shows that after witnessing the fight for about six seconds, an officer fired four shots at Bryant.

While protesters gathered outside the Columbus police department, people in Bryant’s neighborhood witnessed the aftermath of the shooting. One viral video shows police guarding the crime scene, including an officer who yells “Blue Lives Matter” to a group of Black residents standing nearby.

Twitter user @CzezreAdams8889 shared the video, which originally appears to have been posted to Facebook. A couple of onlookers can be heard confusedly discussing the shooting as they record the cops at the scene. After one cop says “Blue Lives Matter,” a man holding a camera says that is an “insult, especially at this place right now.”

“The fuck? That girl just got shot. Did he just say that?” the woman filming continues. “Boy, shut the fuck up, because blue lives don’t matter right now. I don’t want to hear none of that dumb shit.”

According to the Washington Post, another officer on the scene was wearing a Blue Lives Matter mask.

The “Blue Lives Matter” movement has been widely criticized as racist for equating the danger of working as a police officer (a chosen career) with the racial profiling and systemic violence faced by Black people regularly, as highlighted by the Black Lives Matter movement. As many people have pointed out, “Blue” does not describe an ethnicity or marginalized community. By shouting “Blue Lives Matter” in the aftermath of a Black girl being shot by police, this Columbus officer made an explicit political statement.